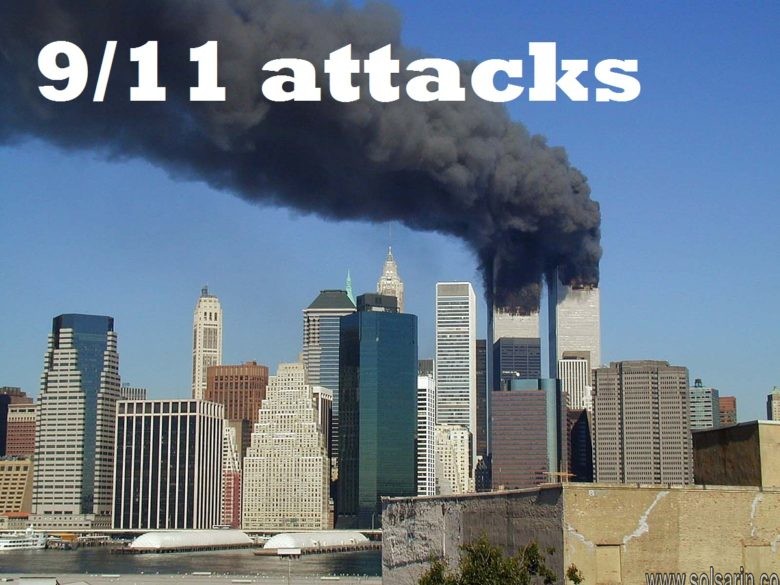 Hello. Welcome to solsarin. This post is about “9/11 attacks”.

The September 11 attacks, commonly referred to as 9/11, were a series of four coordinated terrorist attacks by the militant Islamist terrorist group al-Qaeda  against the United States on Tuesday, September 11, 2001. On that morning, four commercial airliners traveling from the northeastern U.S. to California were hijacked mid-flight by 19 al-Qaeda terrorists. The hijackers were organized into three groups of five members and one group of four. Each group had one hijacker who had received flight training and took over control of the aircraft. Their explicit goal was to crash each plane into a prominent American building, causing mass casualties and partial or complete destruction of the targeted buildings.

Two of the planes hit the Twin Towers of the World Trade Center in New York City, and a third hit the west side of the Pentagon in Arlington, Virginia. A fourth plane was intended to crash into a target in Washington, D.C., but instead crashed into a field near Shanksville, Pennsylvania, following a passenger revolt.

The plane’s passengers attempted to regain control of the aircraft away from the hijackers and ultimately diverted the flight from its intended target; it crashed into a field near Shanksville, Pennsylvania, at 10:03 am. Investigators determined that Flight 93’s target was either the U.S. Capitol or the White House.

In the immediate aftermath of the attacks, suspicion quickly fell onto al-Qaeda. The United States government under the George W. Bush administration formally responded by launching the War on Terror and invading Afghanistan to depose the Taliban, which had not complied with U.S. demands to expel al-Qaeda from Afghanistan and extradite al-Qaeda leader Osama bin Laden. Bin Laden fled to the White Mountains where he came under attack by U.S.-led forces, but managed to escape.

Although bin Laden initially denied any involvement, in 2004 he formally claimed responsibility for the attacks. Al-Qaeda and bin Laden cited U.S. support of Israel, the presence of U.S. troops in Saudi Arabia, and sanctions against Iraq as motives. After evading capture for almost a decade, bin Laden was located in a hideout in Abbottabad, Pakistan, and subsequently killed by the U.S. military on May 2, 2011.

The destruction of the World Trade Center and nearby infrastructure seriously harmed the economy of New York City and created a global economic recession. Many countries strengthened their anti-terrorism legislation and expanded the powers of law enforcement and intelligence agencies to prevent terrorist attacks. The U.S. and Canadian civilian airspaces were closed until September 13, while Wall Street trading was closed until September 17. Many closings, evacuations, and cancellations followed, out of respect or fear of further attacks.

On September 11, 2001, at 8:45 a.m. on a clear Tuesday morning, an American Airlines Boeing 767 loaded with 20,000 gallons of jet fuel crashed into the north tower of the World Trade Center in New York City.

The impact left a gaping, burning hole near the 80th floor of the 110-story skyscraper, instantly killing hundreds of people and trapping hundreds more in higher floors.

As the evacuation of the tower and its twin got underway, television cameras broadcasted live images of what initially appeared to be a freak accident. Then, 18 minutes after the first plane hit, a second Boeing 767—United Airlines Flight 175—appeared out of the sky, turned sharply toward the World Trade Center and sliced into the south tower near the 60th floor.

The collision caused a massive explosion that showered burning debris over surrounding buildings and onto the streets below. It immediately became clear that America was under attack.

The hijackers were Islamic terrorists from Saudi Arabia and several other Arab nations. Reportedly financed by the al Qaeda terrorist organization of Saudi fugitive Osama bin Laden, they were allegedly acting in retaliation for America’s support of Israel, its involvement in the Persian Gulf War and its continued military presence in the Middle East.

Some of the terrorists had lived in the United States for more than a year and had taken flying lessons at American commercial flight schools. Others had slipped into the country in the months before September 11 and acted as the “muscle” in the operation.

The 19 terrorists easily smuggled box-cutters and knives through security at three East Coast airports and boarded four early-morning flights bound for California, chosen because the planes were loaded with fuel for the long transcontinental journey. Soon after takeoff, the terrorists commandeered the four planes and took the controls, transforming ordinary passenger jets into guided missiles.

As millions watched the events unfolding in New York, American Airlines Flight 77 circled over downtown Washington, D.C., before crashing into the west side of the Pentagon military headquarters at 9:45 a.m.

Jet fuel from the Boeing 757 caused a devastating inferno that led to the structural collapse of a portion of the giant concrete building, which is the headquarters of the U.S. Department of Defense.

All told, 125 military personnel and civilians  killed in the Pentagon, along with all 64 people aboard the airliner.

Less than 15 minutes after the terrorists struck the nerve center of the U.S. military, the horror in New York took a catastrophic turn when the south tower of the World Trade Center collapsed in a massive cloud of dust and smoke.

The structural steel of the skyscraper, built to withstand winds in excess of 200 miles per hour and a large conventional fire, could not withstand the tremendous heat generated by the burning jet fuel.

At 10:30 a.m., the north building of the twin towers collapsed. Only six people in the World Trade Center towers at the time of their collapse survived. Almost 10,000 others  treated for injuries, many severe.

9/11 transformed U.S. public opinion, but many of its impacts  short-lived

It is difficult to think of an event that so profoundly transformed U.S. public opinion across so many dimensions as the 9/11 attacks. While Americans had a shared sense of anguish after Sept. 11, the months that followed also  marked by rare spirit of public unity.

Patriotic sentiment surged in the aftermath of 9/11. After the U.S. and its allies launched airstrikes against Taliban and al-Qaida forces in early October 2001, 79% of adults said they had displayed an American flag. A year later, a 62% majority said they had often felt patriotic as a result of the 9/11 attacks.

Moreover, the public largely set aside political differences and rallied in support of the nation’s major institutions, as well as its political leadership. In October 2001, 60% of adults expressed trust in the federal government – a level not reached in the previous three decades, nor approached in the two decades since then.

George W. Bush, who had become president nine months earlier after a fiercely contested election, saw his job approval rise 35 percentage points in the space of three weeks. In late September 2001, 86% of adults – including nearly all Republicans (96%) and a sizable majority of Democrats (78%) – approved of the way Bush was handling his job as president.

Americans also turned to religion and faith in large numbers. In the days and weeks after 9/11, most Americans said they were praying more often. In November 2001, 78% said religion’s influence in American life was increasing, more than double the share who said that eight months earlier and – like public trust in the federal government – the highest level in four decades.

Public esteem rose even for some institutions that usually are not that popular with Americans. For example, in November 2001, news organizations received record-high ratings for professionalism. Around seven-in-ten adults (69%) said they “stand up for America,” while 60% said they protected democracy.

Yet in many ways, the “9/11 effect” on public opinion short-lived. Public trust in government, as well as confidence in other institutions, declined throughout the 2000s. By 2005, following another major national tragedy – the government’s mishandling of the relief effort for victims of Hurricane Katrina – just 31% said they trusted the federal government, half the share who said so in the months after 9/11. Trust has remained relatively low for the past two decades: In April of this year, only 24% said they trusted the government just about always or most of the time.

Bush’s approval ratings, meanwhile, never again reached the lofty heights they did shortly after 9/11. By the end of his presidency, in December 2008, just 24% approved of his job performance.

Thank you for staying with this post  “9/11 attacks” until the end.