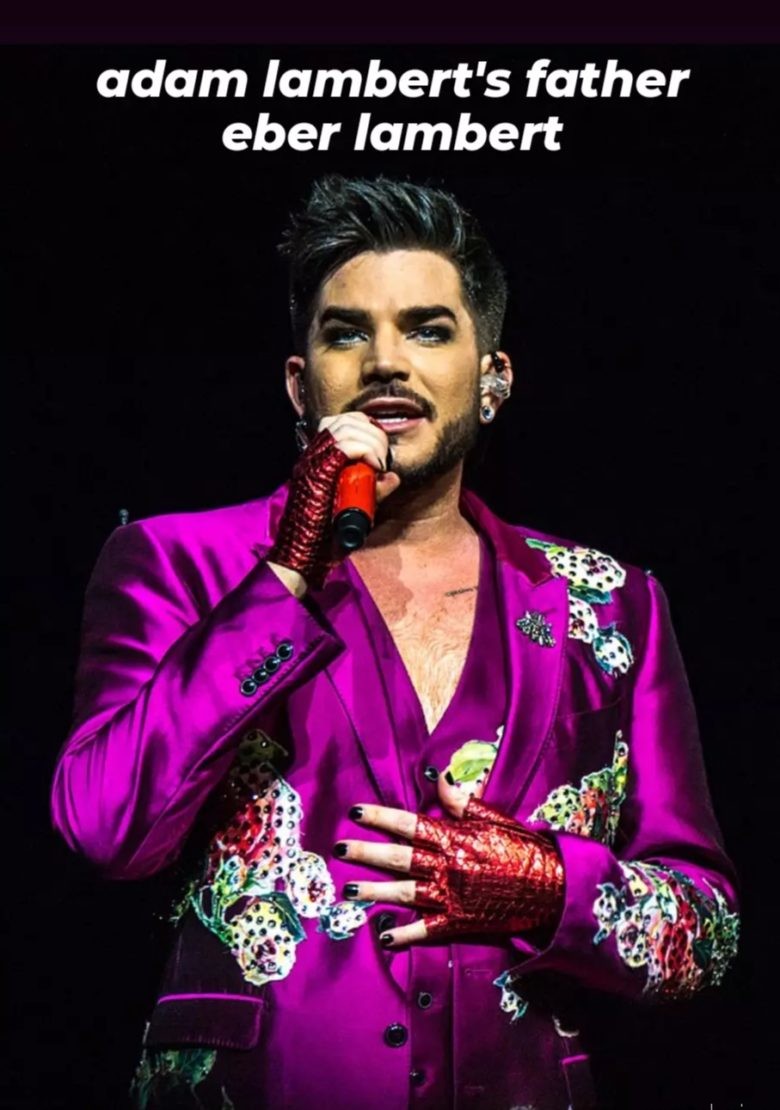 Who Is Adam Lambert?

Adam Lambert’s childhood stage experience positioned him well to compete in the eighth season of American Idol in 2009. His tremendous vocal range and theatrical flair made his performances memorable, and he finished second. His first post-Idol album, For Your Entertainment, debuted at No. 3 on the Billboard 200 chart. Lambert also enjoyed success with two follow-up albums and began touring with the classic rock band Queen.

Are Adam Lambert’s parents still together?

According to the AL Reference Centre, Eber and Leila got married on May 3, 1981. They divorced in 2001, when Adam was 19. Both currently live in San Diego, California, where Eber (pictured above) works as a computer program manager and Leila works as an interior designer. The former lives with his longtime girlfriend, writer Amy Wallen, while the latter got married to a man named Ray in 2018. Adam attended the wedding and later posted photos on his Instagram.

Adam said that his mother not only supported him coming out as gay, but was actually the one who initiated the conversation. “When we had the coming out conversation she kind of initiated it, which was hilarious,” he told People. “At that point, it was great because then we could talk about everything. There was never a point where I was made to feel bad about myself, and I was kind of an out-there kid.”

Leila said that she’s still adjusting to the fact that her son is a global star. “It’s very surreal. I have a hard time realizing that my son is now a household name to many people,” she told Women’s Day. “The beauty is he’s still living in the same town he’s lived in for the last nine years and he still has the same friends. But the amount of work he’s doing has changed. Although he can’t always go places and he has to try to be more inconspicuous, he really appreciates the love and support of his fans.”

Adam said that his parents were completely accepting of his risque stage act. “My dad is a Deadhead, my mom’s a Jewish-American princess from Jersey,” he told Fuse TV. “They never got hung up on stuff like that, and I’m fortunate, because there’s a lot of people who come from households where it’s not OK.”

In 2009, Adam Lambert was in his elements while auditioning for ‘American Idol Season 8’ in San Francisco. By singing highly popular original tracks like ‘Believe, ‘Rock with You,’

‘Some Kind of Wonderful,’ and ‘I Can’t Get No Satisfaction,’ he made it to the last 13 with ease.

In the subsequent stages of ‘American Idol,’

where episodes were broadcast live across the US, he made an indelible impression on the judges by singing hit singles of Michael Jackson,

Lambert’s rendition of ‘If I Can’t Have You’ was praised by DioGuardi, one of the judges, as his “most memorable performance.” His recitals of the tracks ‘One’ and ‘Cryin’ ensured his place in the finale.

and ‘No Boundaries’ impressed the judges, so much so that they almost declared him the winner. Unfortunately, despite his superlative performances,

he lost to Kris Allen who believed that Lambert deserved the title as much as he did.

Adam embarked on the ‘American Idols LIVE! Tour’ in July 2009. In the same year,

he received the ‘Teen Choice Award’ for ‘Male Reality/Variety Star’ and the ‘Young Hollywood Award’ for ‘Artist of the Year.’

Lambert partnered with a host of celebrated singers, songwriters,

and producers, including Linda Perry, Lady Gaga, Matthew Bellamy, Max Martin, and Rob Cavallo for his debut studio record ‘For Your Entertainment.’ The album, which released on 23 November 2009,

opened at the third position on ‘US Billboard 200’ and notched up record sales.

‘For Your Entertainment’ received rave reviews and ‘Whataya Want from Me,’

the album’s second single, moved to the 10th spot on ‘Billboard Hot 100,’ making it his topmost charting single at the time.

In June 2010, Lambert commenced on his first global musical tour titled ‘Glam Nation Tour.’ By the end of the journey,

he had performed in a total of 113 shows in Europe, USA, and Asia.

His second album ‘Trespassing’ was launched on May 14, 2012, and was a big commercial and critical success. It debuted at number one on the ‘Billboard 200’ chart.Lambert debuted on the small screen by portraying Elliot ‘Starchild’ Gilbert in the fifth season of the TV series ‘Glee’ in 2013. ‘Forbes’ magazine voted him as the joint third-highest earning ‘American Idol’ performer in 2013.

‘Legacy Recordings’ released ‘The Very Best of Adam Lambert’ in 2014, which featured commercial recordings from ‘Glee’ and ‘American Idol’ as well as tracks from his first two studio records. Adam, along with the British rock band ‘Queen,’

performed in 35 shows in New Zealand, Australia, North America, Japan, and Korea in 2014.

In 2015, ‘QAL’ (Queen + Adam Lambert) entertained a number of fans in a total of 26 shows, staged in 11 countries in Europe. and the 10th annual staging of the ‘Classic Rock Roll of Honor Awards,’ ‘QAL’ was bestowed with the ‘Band of the Year’ honor.

In 2015, Adam Lambert substituted for Keith Urban in the 14th season of ‘American Idol,’ becoming the first ‘ex-American Idol’ contestant to feature as a judge on the show.

‘Warner Bros Records’ promoted, released, and distributed Lambert’s third studio album ‘The Original High’ on 21 April 2015. The album debuted at the third position on ‘Billboard 200.’ He then went on a tour, visiting countries in Asia, Europe, and the US, performing in television and radio programs.

After releasing a single titled ‘Another Lonely Night’ in 2015, Lambert starred in the television remake of ‘The Rocky Horror Picture Show.’ He then appeared as one of the judges in the eighth season of ‘The X Factor Australia.’

He continued his tour with ‘QAL’ and announced a worldwide arena tour in 2017. The troupe then appeared in various shows, including ‘The Late Late Show with James Corden’ and ‘Jimmy Kimmel Live!’ where in they released their new track ‘Two Fux.’

In 2019, ‘QAL’ became the first rock band to open at the ‘Oscars’ and continued on their extended ‘The Rhapsody’ tour. He then released his next single ‘New Eyes’ from his next studio album ‘Velvet.’

Who is Adam Lambert’s Current Boyfriend?

Adam accepts himself as gay and he is not ashamed of his sexual orientation. He has been linked up with many handsome men from the showbiz industry in America. He is inspired by renowned personalities such as Michael Jackson, Led Zeppelin, Madonna, Aerosmith, David Bowie, Freddie Mercury, and Queen. In November 2010, he started dating the popular Finnish reality television personality known as Sauli Koskinen. Both of them enjoyed a lovely relationship for about three years, but eventually parted their ways in April 2013.

According to the sources,

Adam is in a relationship with Javi Costa Polo nowadays.Apart from his controversial gay personality,

Lambert is a very kind-hearted man. He has donated a huge amount of money to different charitable causes in the United States and beyond. He has been actively involved in advocating social activism and LGBT rights. Adam’s lead role as a speaker at Los Angeles Pride March is not hidden from anyone.

Also, how did Adam Lambert get into Queen?

Queen and Lambert first performed together in 2009 when Queen members Brian May and Roger Taylor appeared as guests on the eighth season of American Idol on which Lambert was a contestant. Soon after the finale, May indicated to Rolling Stone that he was considering Lambert as a frontman for Queen.

In the wake of his American Idol showing, Lambert’s debut album, For Your Entertainment (2009), was a huge success, debuting at No. 3 on the Billboard 200 chart. In 2010, Lambert was nominated for his first Grammy Award, for his hit “Whataya Want From Me.””

In May 2012, Lambert released his second studio album, Trespassing, which met with wide acclaim; Trespassing landed at the No. 1 spot on the Billboard 200, and more than 100,000 copies of the album were sold by June 2012.

The artist enjoyed more success with his third album, The Original High (2015). Fronted by the dance track “Ghost Town,” the album debuted at No. 3 on the Billboard 200 and achieved gold certification early the following year.

What is Adam Lambert’s Net Worth?

The self-proclaimed gay star has earned a lot from his profession as a musician and actor. Apart from being in the limelight of music, he also made stunning appearances on the television and big screen. Adam also appeared in Taylor Swift’s music video titled ‘You Need to Calm Down’ recently in 2019. The total net worth of the amazing artist is approximately $25 Million.

What ever happened to Adam Lambert?

In 2021, Adam is still making music by himself and with Queen, as well as acting and participating in activism. He released his fourth studio album, Velvet, in 2020. … Adam is also heavily involved in LGBTQ+ activism. He has been openly gay since he appeared on American Idol, which was unusual then.