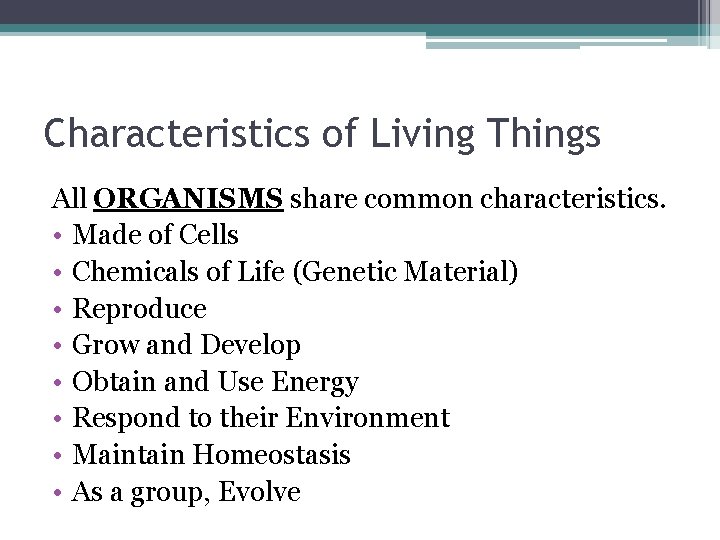 Hi, welcome to solsarin site, in this post we want to talk about“characteristics of all living things”,

Biology examines the structure, function, growth, origin, evolution, and distribution of living things. It classifies and describes organisms, their functions, how species come into existence, and the interactions they have with each other and with the natural environment. Four unifying principles form the foundation of modern biology: cell theory, evolution, genetics and homeostasis.

All living things are able to maintain a more-or-less constant internal environment. They keep things relatively stable on the inside regardless of the conditions around them. The condition in which a system is maintained in a more-or-less steady state is called homeostasis.

Living things grow and change on a daily basis, but also over many generations. The largest redwood trees began as tiny seeds that grew a little more each day. But redwood trees have also adapted to their environment over millions of years, making them resistant to wildfires and tree rot. Redwoods, like all living things, are capable of growing and changing in the short term and evolving in the long term.

Single-celled organisms reproduce by first duplicating their DNA, and then dividing it equally as the cell prepares to divide to form two new cells. Multicellular organisms often produce specialized reproductive germline cells that will form new individuals. When reproduction occurs, genes containing DNA are passed along to an organism’s offspring. These genes ensure that the offspring will belong to the same species and will have similar characteristics, such as size and shape.

Fungi process energy from dead leaves, sharks receive energy from eating smaller fish, and flowers create energy through photosynthesis. All living things, also known as biotic factors in an ecosystem, require energy to survive. Heterotrophs, including carnivores, herbivores, omnivores, and decomposers, find food from other organisms. Autotrophs, such as phytoplankton and iron bacteria, make their own food. But all of these organisms use sustenance to create energy through chemical reactions, which maintain nutrition and health.

Even the smallest organisms are complex and require multiple regulatory mechanisms to coordinate internal functions, respond to stimuli, and cope with environmental stresses. Two examples of internal functions regulated in an organism are nutrient transport and blood flow. Organs (groups of tissues working together) perform specific functions, such as carrying oxygen throughout the body, removing wastes, delivering nutrients to every cell, and cooling the body.

Living things have multiple levels of organization.A cell is the basic unit of the structure and function of living things. Cells are the building blocks of living organisms. An average adult human being, for example, consists of trillions of cells. Living things may appear very different from one another on the outside, but their cells are very similar. Compare the human cells and onion cells in the figure below.

To classify an organism as living, it must exhibit some form of movement. Though humans and animals obviously move, other items such as plants also move though it is hard to see without a time-lapse camera. Plants move their buds or leaves toward sunlight or away from shaded areas to promote growth.

Characteristics of all Living Things biology

Living things exist and are alive and are made of microscopic structures called cells. They grow and exhibit movement or locomotion. They experience metabolism, which includes anabolic and catabolic reactions.

Living things are capable of producing a new life which is of their own kind through the process of reproduction. Living things have a particular life span and are not immortal.

Cellular Respiration enables living organisms to acquire energy which is used by cells to perform their functions. They digest food for energy and also excrete waste from the body. Their life cycle can be summarised as follows – birth, growth, reproduction and death.

Following are the important characteristics of living things:

What are the examples of single-celled and multicellular living organisms?

Bacteria and yeasts are examples of single-celled organisms. At the same time, the rest of the living things, such as animals and plants, consist of hundreds of trillions of cells and fall into the category of multicellular living organisms.

What is the genetic mechanism?