christianity was founded where 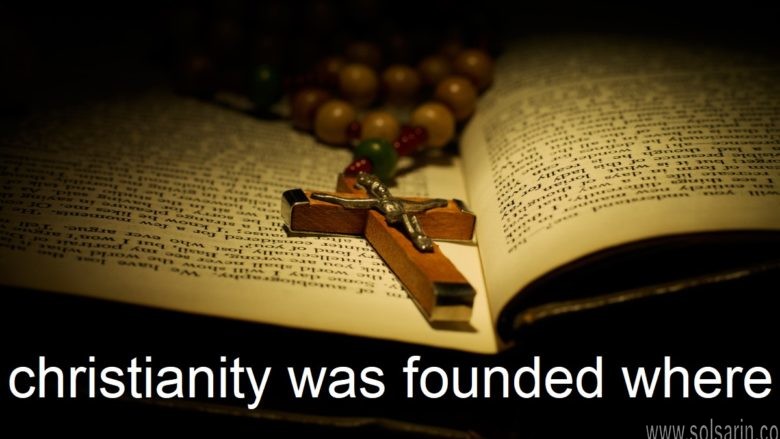 christianity was founded where

Hello, welcome to solsarin. This post is about “christianity was founded where“.

The history of Christianity concerns the Christian religion, Christian countries, and the Christians with their various denominations, from the 1st century to the present.

Christianity originated with the ministry of Jesus, a Jewish teacher and healer who proclaimed the imminent kingdom of God and was crucified c. AD 30–33 in Jerusalem in the Roman province of Judea.

The earliest followers of Jesus were apocalyptic Jewish Christians. The inclusion of gentiles in the developing early Christian Church caused a schism between Judaism and Jewish Christianity during the first two centuries of the Christian Era.

In 313, Emperor Constantine I issued the Edict of Milan legalizing Christian worship. In 380, with the Edict of Thessalonica put forth under Theodosius I. The Roman Empire officially adopted Trinitarian Christianity as its state religion. And Christianity established itself as a predominantly Roman religion in the state church of the Roman Empire.

Since the Renaissance era, with colonialism inspired by the Church, Christianity has expanded throughout the world. Today there are more than two billion Christians worldwide, and Christianity has become the world’s largest religion. Within the last century, as the influence of Christianity has waned in the West, it has rapidly grown in the East and the Global South; in China, South Korea and much of sub-Saharan Africa.

The prime sources for knowledge of Jesus of Nazareth are the four canonical Gospels in the New Testament. There are also a number of noncanonical sources, notably the apocryphal gospels, which contain stories about Jesus and sayings attributed to him. The Gospel of Thomas, preserved in a Coptic gnostic library found about 1945 in Egypt, contains several such sayings, besides some independent versions of canonical sayings.

At certain points the Gospel tradition finds independent confirmation in the letters of the Apostle Paul. Although the allusions in non-Christian sources (the Jewish historian Josephus, the Roman historians Tacitus and Suetonius, and Talmudic texts) are almost negligible, they refute the unsubstantiated notion that Jesus might never have existed.

The first three Gospels—Matthew, Mark, and Luke—are closely related in form, structure, and content. Because they can be studied in parallel columns called a synopsis, they are known as the Synoptic Gospels. Mark was probably used by Matthew and Luke, who may also have used the Q Gospel (so-called from the German Quelle, “source”; Q is the hypothetical Gospel that is the origin of common material in later Gospels).

John, differing in both pattern and content, appears richer in theological interpretation but may also preserve good historical information. Although many details of the Gospels remain the subject of disagreement and uncertainty, the scholarly consensus accepts the substance of the Gospel tradition as a truthful account.

Most historians believe that Jesus was a real person who was born between 2 B.C. and 7 B.C. Much of what scholars know about Jesus comes from the New Testament of the Christian Bible.

According to the text, Jesus was born to a young Jewish virgin named Mary in the town of Bethlehem in the West Bank, south of Jerusalem. Christians believe the conception was a supernatural event, with God impregnating Mary via the Holy Spirit.

Scriptures reveal that he grew up in Nazareth, he and his family fled persecution from King Herod and moved to Egypt, and his “earthly” father, Joseph, was a carpenter.

For about three years, Jesus traveled with 12 appointed disciples (also known as the 12 apostles), teaching large groups of people and performing what witnesses described as miracles. Some of the most well-known miraculous events included raising a dead man named Lazarus from the grave, walking on water and curing the blind.

Based upon traditional Christian Scripture, community creedal statements, and non-canonized historical writings of the Christian Church Fathers, primitive Christianity taught that Jesus of Nazareth (also known as Jesus Christ) was/is the Son of God who, fulfilling centuries-old Jewish prophecies of a coming Messiah to set God’s people free from bondage, was paradoxically incarnated as a fully-human being, living a sinless life in order to become the perfect sacrifice to reconcile all humanity to Yahweh, the Jewish creator God.

In Jesus’ earthly mission, he ministered to the spiritually and physically hurting people of Israel (and nearby regions), he promoted a purist, personal faith based upon absolute love of God and neighbor, and he challenged the corruption/oppression of the political and religious elite.

Socially, this led to controversy and conflict with the ruling powers in Jerusalem, Judea, and Roman demesnes. Eventually, Jesus was arrested, tried, and convicted by the Sanhedrin under Caiaphas, the Jewish High Priest, and for treason in the Roman courts under Pontius Pilate, the Roman governor of Judea (although Jesus’ Jewish enemies wanted him convicted of blasphemy).

Ironically, in both instances, the trial of Jesus violated traditional, official Jewish and Roman jurisprudence for capital crimes, procedures, and protocol, ending with an unlawful sentence and subsequent execution by crucifixion, which was carried out by Roman soldiers on what later came to be called, “Good Friday.”

According to multiple eyewitness testimonies in the region (as detailed in the Gospels and the Epistles), through a supernatural resurrection by God, Jesus -miraculously alive and well – appeared to a variety of people, having perfectly performed his father’s mission on earth. Somewhat ironic considering the Patriarchy of the era, Jesus’ first appearance was to a woman – Mary Magdalene – who immediately ran and told the other Disciples about what she had seen and heard.

The establishment of Christianity in Europe

Later encounters of Jesus included Mary, the mother of James; Salome; Joanna; James, the half-brother of Jesus; the lead Disciple Peter and eventually all of the remaining eleven Disciples (except for Judas who had committed suicide, earlier). And the Apostle Paul who would be later so instrumental in establishing Christianity in Europe.

In fact, in Paul’s First Epistle to the Corinthians. He records that over 500 people saw Jesus, the risen Christ, all at the same time. Although some of them had already died by the time he wrote his second letter to Corinth. Jesus left the earthly realm and ascended into Heaven.

How many years ago did Christianity start?

Christianity began in the 1st century AD. After Jesus’ it spread rapidly throughout the Roman Empire as a sect of the Jewish people in Judea. Despite the first persecution of Christians, it later became the state religion.

How long has Christianity existed in this sense?

Christianity is the largest religion in the world with approximately 2.1 billion followers worldwide. It is based on the teachings of Jesus Christ, who lived in the Holy Land 2,000 years ago.

Secondly, when did the era of the Church begin?

First-century Christianity encompasses the formative history of Christianity, from the beginning of Jesus’ ministry (about AD 27-29) to the of the last of the twelve apostles (about 100) (and is therefore also referred to as time). apostolic).

What is the oldest religion?

The Upanishads (Vedic texts) were composed. And contain the first appearance of some of the central religious concepts of Hinduism, Buddhism and Jainism.

What were their names before they were called Christians?

While around 331 A.D. And that Christians were once called Nazarenes in the early days. The Hebrew equivalent of the Nazarene, Notzrim, appears is in the Babylonian Talmud. And it is still the modern Hebrew-Israeli term for Christian.

How many religions does Christianity belong to?

What did Jesus teach?

Resurrection, Ascension and other futures

Who were the early Christians?

Christianity emerged from Jesus’ ministry in the Roman province of Judea in the year 1000. According to the Gospels, Jesus was a Jewish teacher and healer who preached the coming kingdom of God and was crucified around AD 30-33.

Who started the religion?

How did Christianity spread around the world?

From the son of a Jewish carpenter, the religion spread first through the disciples of Jesus, then through emperors, kings and missionaries around the world. Through crusades, conquests and words alone, Christianity has profoundly influenced the last 2,000 years of world history.

The Gentile mission and St. Paul

Saul, or St. Born at Tarsus (Asia Minor), he had come to Jerusalem as a student of the famous rabbi Gamaliel and had harried a Christian group called by Luke the “Hellenists,” who were led by St. Stephen (the first Christian martyr) and who regarded Jesus as a spiritual reformer sent to purge the corrupt worship of Jerusalem.

He saw clearly that the universal mission of the church to all humanity, implicit in the coming of the Messiah, Christ, meant a radical break with rabbinical traditions.

Thank you for staying with this post “christianity was founded where” until the end.