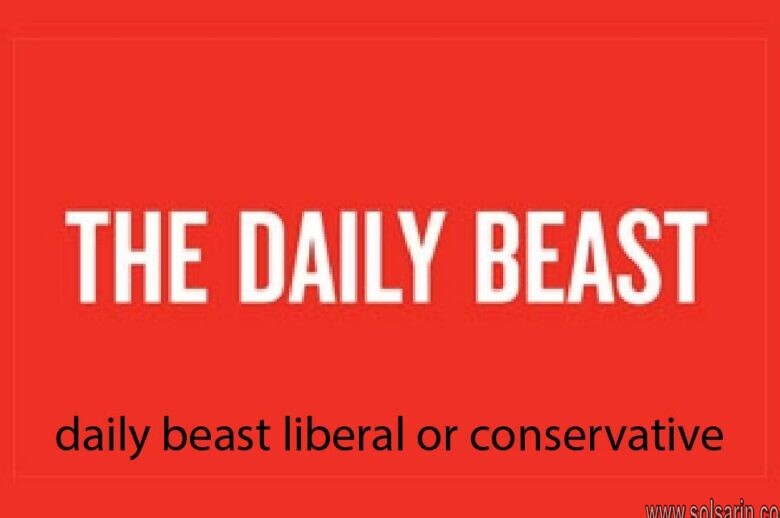 Hello dear friends, thank you for choosing us. In this post on the solsarin site, we will talk about “daily beast liberal or conservative”.
Stay with us.
Thank you for your choice.

The year 2018 was another tough one for those of us in the media. We saw President Donald Trump continue to refer to us as an “enemy of the people,” CNN’s New York offices evacuated because of a bomb threat, and the White House’s efforts to suspend Jim Acosta’s press credentials. The pain wasn’t limited to outlets that do straight news reporting, either. The year ended with the shutting of The Weekly Standard, the highly respected conservative (if anti-Trump) magazine.

As 2019 dawns, it might be appropriate to ponder the future of our industry. One common thread I’ve observed is that that nobody has really figured out the formula for funding smart, original content that consistently turns a profit. But to fully understand the challenges facing the industry, I wanted to talk with someone from the other side of the aisle, who has been around the block.

In an April 2018 interview, Avlon described the publication’s political stance as “nonpartisan but not neutral … what that means is we’re going to hit both sides where appropriate, but we’re not going for mythic moral equivalence on every issue.”

In November 2016, Avlon published an editorial, “How The Daily Beast Will Stand Up to President Donald Trump.”

“We were early, principled, and unapologetic opponents of Donald Trump’s divisive and demagogic campaign,” Avlon wrote. “But if he is our next president, we will not question his legitimacy or hope he fails. Instead, we will count ourselves members of the loyal opposition.

loyal to the United States of America and opposed to the policies proposed by the president-elect during his campaign. And we will reflect on what has led so many of our fellow Americans to embrace such a messenger.”

It read, “With a Supreme Court nomination that could upend decades of progress in civil rights, reproductive rights, LGBTQ rights, and more, you need a news site that’s on your side. Join The Daily Beast’s membership program to support our journalism.” Right-leaning website The Daily Caller  reported on the advertisement and wrote that “the ad clearly betrays the site’s liberal bias.”

About The Daily Beast

The Daily Beast is an American news reporting and opinion website founded and published by Tina Brown, former editor of Vanity Fair and The New Yorker as well as the short-lived Talk Magazine. The Daily Beast was launched on October 6, 2008, and is owned by IAC. Edward Felsenthal, a former Wall Street Journal editor, is the site’s executive editor, and Stephen Colvin is its president.

The name of the site was taken from a fictional newspaper in Evelyn Waugh’s novel Scoop. On November 12, 2010, The Daily Beast and Newsweek announced a merger deal, creating a combined company, The Newsweek Daily Beast Company.

The Daily Beast is Progressive. Progressive means replacing the tenets of American Liberty, such as the blessings of life, liberty and the pursuit of happiness, Individualism, Classical Liberalism, Constitutional Republicanism, Checks and Balances with the Utopian Ideals of Social Justice, Collectivism, egalitarianism and a more centralized form of government.

Newsweek magazine was launched in 1933 by a group of U.S. stockholders “which included Ward Cheney, of the Cheney silk family, John Hay Whitney, and Paul Mellon, son of Andrew W. Mellon,” according to America’s 60 Families by Ferdinand Lundberg. The Daily Beast was founded in 2008 by Tina Brown, former editor of Vanity Fair and The New Yorker as well as the short-lived Talk Magazine.

Newsweek was purchased by The Washington Post Company in 1961. With increasing competition from online news sources, years of financial losses forced the Company to sell the magazine in 2010 to Harman Media, owned by Sidney Harman.

In November 2010, it was announced that Newsweek and The Daily Beast would merge into a joint venture named The Newsweek Daily Beast Company, with IAC and Sidney Harman each owning 50 percent of the new company. Harman’s rationale for the merger was that: “In an admittedly challenging time, this merger provides the ideal combination of established journalism authority and bright, bristling website savvy.” The company plans to redirect the Newsweek.com address to The Daily Beast, despite the fact that the former has higher traffic.

Reception to the merger was not positive. As former Newsweek president Mark Edmiston comments on The New York Times, “I don’t see how you can take two money-losing businesses and put them together and come up with a single entity that makes money.” As the two businesses target very different demographics, Edmiston questioned the appeal of the merger to advertisers.

Newsweek staffers reacted ambivalently to the merger. There was opposition to redirecting the Newsweek.com site, due to the amount of effort and work that staffers have spent on building the site. The news came unexpectedly to staffers, a sentiment reflected on SaveNewsweek.com, which states that “It’s always nice to wake up and find out in the Times that your job is doomed”.

In 2012, it was announced that Newsweek would stop publishing its print magazine by December. The Newsweek brand would be retooled as Newsweek Global and continue as a digital-only magazine for e-book readers and tablet computers.

On August 3, 2013, IBT Media announced it had acquired Newsweek from IAC on terms that were not disclosed; the acquisition included the Newsweek brand and its online publication, but did not include The Daily Beast.