do you need to peel eggplant before cooking 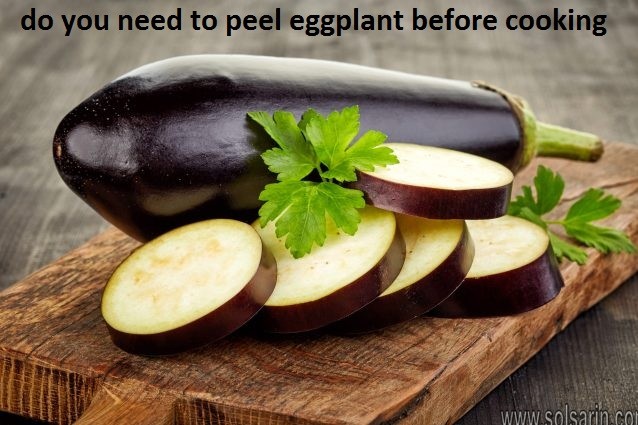 do you need to peel eggplant before cooking

Hi everyone,This article on solsarin site is going to give you some information about ” do you need to peel eggplant before cooking ”

do you need to peel eggplant befoe cooking ?

Eggplants get a bad rap for being bitter, bland, or just gross. But often it’s just the result of bad cooking, and not necessarily the eggplant’s fault. The best way to get eggplant’s true flavor is to roast it. But when it comes to cooking eggplants in general, should you peel it ?

Is the skin edible, or is it dangerous ? Does it cook differently without the skin ? Let’s take a look at how to handle eggplants when cooking them, to make sure you get the best flavor possible.

Should you peel eggplants ?

Eggplants can be cooked with and without their skin, but most often the skin is left on.

And yes, the skin of an eggplant is edible, especially the skins if younger, tender veggies that didn’t have time to harden and become leathery. If you have a nightshade allergy the entire vegetable is not edible, with or without the skin.

When you roast eggplants, you need the skin on. You rely on it to keep the content inside, and it keeps a lot of moisture inside as well. This makes peeling the eggplant much easier, especially of you salt it to bring out moisture and soften the skin.

Read also: Why Are My Mashed Potatoes Gummy

If you were to roast the eggplants peeled you’d get a creamy, loose mess that would also burn right there on the grill.

It’s not just roasting that asks for the skins to be kept on. When you’re sauteeing, grilling eggplant slices, even just making ratatouille, you need the skin on to keep the whole thing intact. You see, eggplant turn very creamy and mushy when they’re cooked. If you don’t leave the skin on, they’re much more difficult to handle.

In some cases, when you’re trying to incorporate eggplant into the dish and want to keep a certain look, you may need to peel the eggplant. For example in risottos and pilafs, where you may want to keep an uniform color, the skins may contract the rest of the food.

There are some mashed potato recipes that add creamy, roasted eggplant to the mix for an extra bit of flavor. There you need to add only the creamy middle of the eggplant, and not the skins themselves.

Can you eat eggplant raw ?

Eggplants may be eaten raw but they have a very difficult texture. They’re much like a dry sponge and will absorb any oil and liquid you put onto them. That being said, raw eggplant has a higher chance of tasting a little bitter, and it’s difficult to pair it with something.

In general, eggplants taste better when cooked, even if not all the way.

Should you salt eggplants before cooking ?

It’s a good idea to salt eggplants before cooking them, for several reasons. First, you draw out any extra moisture that will prevent them form cooking fast enough. Second, adding salt improves the flavor, or rather it makes the flavor easier to detect by our taste buds.

And finally, some eggplants, especially older ones, may be a little bitter. Adding salt to draw out moisture will also draw out a good portion of the bitterness. This leads to better eggplants, no matter how you’re cooking them.

All that being said, for the past few decades eggplants have been bred to have as few seeds as possible, and not be bitter. This means that for the most part you don’t need to actually salt them before cooking. Salting was primarily used to remove bitterness, but nowadays it’s no longer necessary. Still, you never know when you run across a bitter eggplant and wish you’d salted it.

Should eggplants be brown inside ?

A little brown on the inside of an eggplant is fine, especially around the seeds. If your eggplants are mostly brown they’re no longer good, or  on their way to not being good, since they’re either too old or have been harvested quite some time ago and are reaching the end of their shelf life.

Even so, if the raw eggplant does not taste bad when you touch it to your tongue, you can cook it. If you’ve stored your eggplant in the fridge for a week before use you’re very likely to have it a little brown on the inside, around the seeds.

As delicious as eggplants are, they’re really mysterious and hard to get right. So let’s take a look at some of the most common mistakes people make when cooking eggplants, so you don’t make them.

1. Adding too much or too little oil when cooking eggplants

Eggplants are notorious oil soakers. No matter how much cooking oil you add, there’s almost never any of it left in the pan. So you add more and then it’s all gone too. Why ? Eggplants are built like a very dry sponge, so they will absorb all the moisture and oil you throw at them.

If you cook the eggplants without any cooking oil, they will dry out and stick to the pan. The best way to cook eggplants is to use as mush oil as you normally would for other vegetables. Just lightly brush them on either side, cover, and let sit until they can be flipped. Trust the eggplants, they will still brown and flip if you ad a small about of oil.

2. Overcrowding the pan with to much eggplant

When you’re trying to get perfectly brown eggplants, keep in mind they will still soften. Still, you don’t want to add too many eggplant slices in the pan at once, as they will cook slower. Space them out and, if you cover them, leave the cover off for the last few minutes.

3. Expecting it to have more texture

Eggplants are creamy vegetables when cooked, and there is no way around it. When if you undercook them, you’ll notice they easily break down and tend to have a creamy feel to them. So if you’re adding eggplant to the mix in the hopes of getting more texture and bite from you veg, you’re using the wrong one.

Before we go further into peeling versus no peeling, it is important to know the nutrition behind the eggplant. Eggplant is a vegetable that is grown in warm seasons, typically in temperate climates and also perennially in more tropical climates.

The skin itself is purple with hints of black in color. When you’re looking for an eggplant, check to make sure there are discolorations or cracks in the skin. If the skin is rubber and looks worn, you should move on and find something else.

Eggplant is also commonly mislabeled as a vegetable, much like tomatoes. In actuality, it is a fruit. Eggplants are completely free of cholesterol, fat, and sodium. They are also a great source of fiber and are low in calories.

To Peel or Not to Peel

Back to the big question: should you peel your eggplant? Generally speaking, an eggplant has a mild taste and a soft inside. This makes it great for sautéing, baking, and even frying.

The skin, though, can be quite thick and have a bitter taste. For this reason, many people choose to peel off the skin.

But before you decide that peeling the skin is automatically a good idea, think again. The skin can be the healthiest part of the eggplant.

There have been studies showing that keeping the peel on your vegetables and fruits can help to retain the fiber in those foods. If you are trying to maintain a high fiber, balanced diet, keep the skin on your fruits and vegetables.

Making the Skin of the Eggplant More Edible

If you want to make the eggplant skin more edible, start at the source. Be more selective in the eggplants that you choose. Look for smaller, younger eggplants.

These will generally have thinner skins that are easier to consume. If you end up with older eggplants, peeling the skin before consuming it is the best bet.

It may come as a shock, but many supermarket eggplants are actually overripened.

Eggplant can make for a great alternative to meat. This is because it has a substantial texture to it and a savory taste as well.

So, if you’re a vegetarian or simply looking to cut down on the amount of meat that you consume, eggplant can make for a great alternative.

There are also a ton of recipes out there that don’t require any peeling or skinning. You can simply dice the eggplant down into smaller cubes or sliced rounds and grill or stir-fry them up.

If you really want to get fancy with it, there are some recipes where eggplant can even be used to make imitation bacon.