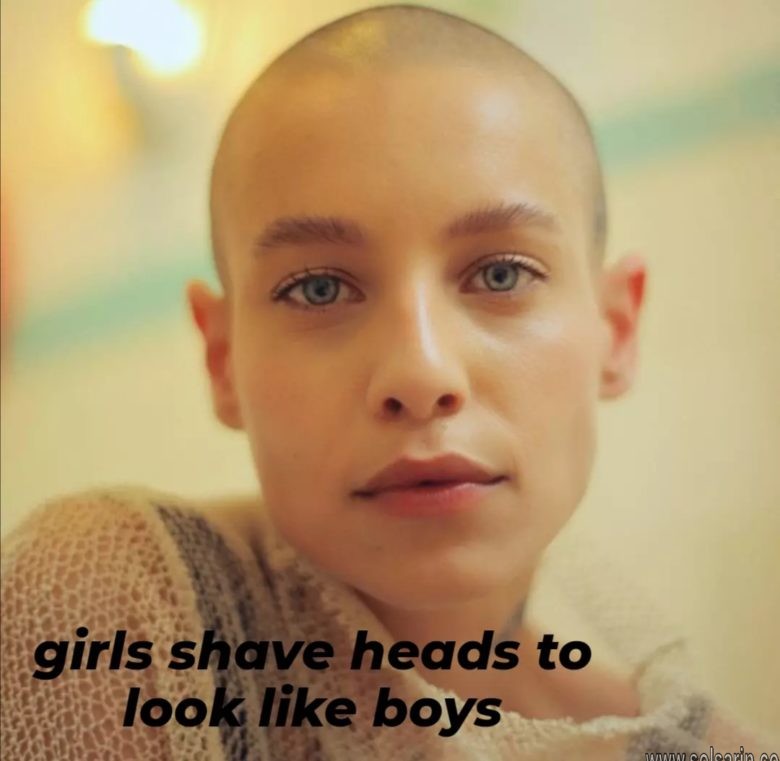 Hair seems to be more important to gender identity for women than men.

Men already often lose or shave their hair anyway, but for a woman the change is more extreme.
Though some women will experience thinning, or hair loss due to chemotherapy, most will never shave their heads.

For some women shaving their head can be a source of breaking away from gender role constraints, or to show rebellion against default society.
For others is it a way to get attention or to explore their own identity.

I think it is a great idea for all of us to play with identity, and hair grows back anyway.

People should shave their heads at least once in their life.

To be able to stand out from the crowd can be a confidence booster, especially if it’s for having a striking buzz cut. Although several iconic stars have taken the cut, it can still be considered something big. Even if shaving off your hair isn’t meant to be a statement, it is still a bold move.

Despite beauty coming in all forms and colors, society still has certain beauty standards when it comes to women, that are emphasized by the media’s focus on women’s hair and beauty products.

Many women have found that they have been able to step outside of these stereotypes by simply shaving their heads, and they rock it! It is such a head-turner that many celebrities and famous movie characters have used this look to create strong female protagonists.

Benefits of shaving your head

There are a lot of different reasons why every woman should shave her head at least once.

One of the most obvious benefits of having no hair is how easy it is! The time it takes for you to get ready in the morning will most likely be cut in half because you won’t have to style your hair. Of course, you can still dress up your look with a cute headband, hat or scarf!

As all of us women know, having hair can be expensive! From regular trips to the salon, to the price of products we use, the cost really adds up. If you have a shaved head though, you don’t need to spend any money on it.

Forget about bad hair days. Sometimes a new look can lift your spirits.

Perceptions on baldness change with the times. Some research from 2012 suggests that men who shave their heads are seen as having attractive dominant traits. In general, women are viewed as more confident when they disregard convention with regard to their appearance.

Barring a health issue that affects hair growth, it’s not an irreversible decision. You can always grow a new crop of hair.

Hair loss affects both males and females. Maybe you’re not fond of your receding hairline, thinning hair, or irregular growth pattern. Plus, certain health conditions, such as alopecia areata, can cause patchy hair loss.

You can try topical treatments and other remedies. There are always hairpieces, wigs, and hats. But if you’re tired of all that, shaving your head could be an easier way to go.

Why don’t women have to shave their heads in basic training?

Men have had to get their heads shaved during basic military training for decades — so long that it’s become almost a rite of passage (even though the original reason for doing it isn’t as worrisome as it used to be, the tradition continues).

So, a reader asks, why don’t women have to do the same? There are several reasons. The first has to do with military regulations. Just like there’s an app for everything a civilian could possibly think of, there’s a reg that answers nearly any question military personnel could have.

Army regulations, for example, stipulate that a woman actually can’t shave her head. Shaved styles are considered trendy — a big no-no in the stylishly conservative and highly restricted world of the military.

Women what it felt like to shave their heads

Cara Delevingne is the latest celebrity to go for a buzzcut. When I shaved my head, it felt like a way to cut off the past and start again

Cara Delevingne’s silver scalp was the talk of the Met Ball last week, following Kristen Stewart sporting a bleached buzzcut in March for a new film role. In the fashion world, Adwoa Aboah and her grade-one fuzz is on the cover of both the latest i-D and LOVE magazine’s new issue, alongside Slick Woods, another model with a shaved head.

It may be becoming de rigueur, but a woman with a shaved head still invites comment and gets up some people’s noses. “It’s exhausting to be told what beauty should look like,” wrote Delevingne on Instagram, in what seemed like a rebuttal to criticism of her bald look. “I am tired of society defining beauty for us. Strip away the clothes, wipe off the makeup, cut off the hair.”

When I shaved my head five years ago, there were fewer examples in pop culture. There was Sinéad O’Connor, of course; and Demi Moore, Solange Knowles and Natalie Portman had all done it at one time or another. I always loved that scene in Empire Records when Robin Tunney’s character arrives at work and shaves her head in the bathroom while The Martinis’ Free plays in the background.

Women what it felt like to shave their heads

In the 1970s, Grace Jones made the shorn look an expression of fashion and style. “I liked how having it short was a threat to people because it made me look so confrontational. It made me look hard, in a soft world,” she wrote in her memoir. This explanation doesn’t surprise me; my reasons for shaving my head were deeply psychological.

Bzzz. Bzzz. I can still remember the sound and the feeling of having my head shaved for the first time. It was a warm evening in July, I had some kind of throat infection and we were about to go on holiday. I had been dyeing my hair various colours of the rainbow since I was 12. The only options I had left were green or … shaved. I was about to start a new job and felt, for a few reasons, that I was starting again. Shaved it would be. As my hair dropped to the floor, and we went shorter and shorter with the clippers, I felt lighter, liberated, ecstatic. It sounds ridiculous, but the effect was so powerful that my tonsils, or whatever it was, stopped hurting.

I kept my head shaved for a couple of years, enjoying the ease of my husband getting his clippers out, not costing a penny, wash and go. I loved the way my scalp felt like a velvety vole. But in a way, it was high maintenance. It required makeup and a proper outfit. And growing it out was a bore.

I cut my hair very short again recently, following the birth of my daughter. Again, it was a psychological act, a need to express the end and beginning of a new life. I’m not happy with it, to be honest. But in the words of Esther Tognozzi, the owner of the Californian hair salon where Britney Spears shaved her head: “It’s only hair, it grows back.”

When did you first shave your head?

“I first shaved my head in 2011. It was something I had always wanted to do. I wanted to feel like the most natural form of myself.”

“I feel ridiculously confident and empowered, and proud to have a shaved head in a time when loving yourself is a rebellious act. People are still pretty hung up on having longer hair, but with more representation, I feel like we’ve really influenced a shift. This is probably the truest form of myself that I’ve ever found.”

Why did you decide to shave it off?

“I had been going through a weird rough patch in my life. I was unhappy with a lot of things that were out of my control. When I decided to shave my head, it was something I had control over. Shaving it off gave me a feeling like what I assume scientists feel when they discover a breakthrough: It was breathtaking. I felt so strong, and so sure of my decision that it carried over into my everyday life. I’ve had a couple people tell me that I’ve inspired them to live their life how they want to, regardless of what people think or society tries to tell them.”

How do you feel about the way pop culture portrays women with buzz cuts?

“I would really love to see someone with a shaved head portrayed as soft and feminine, but I think it’s awesome that having a shaved head goes hand-in-hand with being incredibly strong in pop culture. In public, I’m often asked if I hate men, because they think I’m a radical feminist. While I am a feminist, I don’t hate anybody. It’s just a hairstyle—it doesn’t have to reflect anything about my life.”