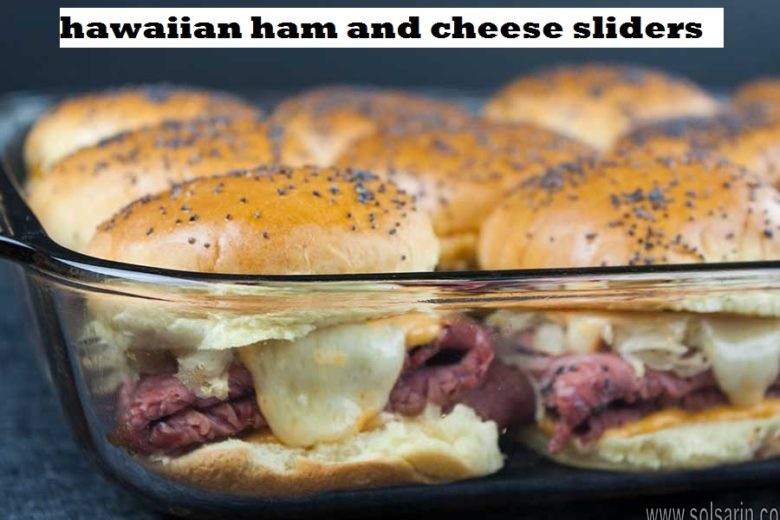 Hello and welcome to solsarin. This post is about “hawaiian ham and cheese sliders“.

Sliders are always, always, always a game day winner: they’re scrumptious, they’re finger food, and they’re tiny, so you can have more than one. In our humble opinion, this might be the world’s most perfect slider. It’s a delightful little stack of Swiss cheese, honey ham, and Dijon mustard on an ultra-soft Hawaiian sweet roll — and it’s drenched in an onion-mustard butter. It’s crispy, mouthwateringly sweet, soft, salty, ooey-gooey, and chewy all at the same time.

Best of all, they come together in under 30 minutes, which is great because you’re going to want to make a lot of them. The recipe says to start with two packages of rolls, which may sound like a lot in Covidian times — but these sliders go down easy. We told our crew of tasters, “Have two, they’re small,” but most of them came back for thirds. Or tried to: as supplies dwindled, folks were heard to say, “How many have you had?” and “That’s mine!”

Ham and cheese sliders are a natural for game day, but we’d roll them out for any gonzo snacking occasion, from siblings on the patio to bad TV night. For beers, think about something with plenty of hoppy character, like a Sculpin from Ballast Point Brewing & Spirits.

How to Make the Ham & Cheese Sliders

Thank you for staying with this post “hawaiian ham and cheese sliders” until the end.