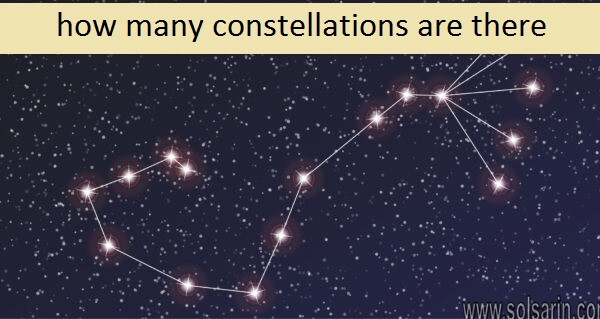 Hello dear friends, thank you for choosing us. In this post on the solsarin site, we will talk about “how many constellations are there”.
Stay with us.
Thank you for your choice.

There are 88 modern  recognized by the International Astronomical Union (IAU). The list of the modern  was adopted by the IAU in 1922.

The constellation boundaries as we know them today were set in the late 1920s. 36 modern  lie principally in the northern celestial hemisphere, while 52 are found in the southern sky.

The list of the modern  and the abbreviations used for them were produced by American astronomer Henry Norris Russell and approved by the IAU in May 1922.

Russell’s list corresponded to the  listed in the Revised Harvard Photometry star catalogue, published by Harvard College Observatory in 1908.

The constellation boundaries were drawn by Belgian astronomer Eugène Delporte and officially adopted in 1928.

Who created the constellations?

The 88 modern  have different origins.

Most of them are roughly based on the 48 ancient  catalogued by the Greek astronomer Claudius Ptolemy of Alexandria in his Almagest.

an ancient astronomical treatise written in the 2nd century CE.

These  are mostly associated with figures from Greek mythology.

However, Ptolemy did not create these

They were already well-known to observers long before his time. Even though they are called Greek  , they were not necessarily created by the Greeks.

Depictions of some of the ancient constellations or the asterisms they are known for go back to prehistoric times and their creators are unknown.

Fifty of the modern 88 constellations are based on the Greek ones.

Only one of Ptolemy’s constellations – Argo Navis – is no longer in use.

It was divided into three smaller constellations – Carina, Puppis and Vela – by the French astronomer Nicolas-Louis de Lacaille in the 18th century.

The three smaller constellations remain in use.

Here is a selection of the most familiar and easily seen constellations in the northern sky.

A constellation is formally defined as a region of the celestial sphere with boundaries laid down by the International Astronomical Union (IAU).

Constellations are usually based on asterisms, which are chance groupings of stars in the sky that resemble familiar patterns.

The constellations are actually much larger than the asterisms they contain.

Today there are a total of 88 constellations that cover the entire night sky.

36 of these are located in the northen hemisphere of the sky while the remaining 52 are in the southern hemisphere.

This practice goes back thousands of years.

possibly even to the Upper Paleolithic.

(ca. 17,300 years old) that could be depictions of the Pleiades cluster and Orion’s Belt.

The International Astronomical Union (IAU) currently has a list of 88 accepted  .

who in 1922, aided the IAU in dividing the celestial sphere into 88 official sectors. In 1930, the boundaries between these  were devised by Eugène Delporte.

along vertical and horizontal lines of right ascension and declination.

How the Night Sky Constellations Got Their Names

In more recent times people have invented the modern constellations to fill up some of these spaces.

In our current evening sky, roughly between the bright star Capella and the Big Dipper’s bowl are two examples of modern constellations. The first is the “camel-leopard,” Camelopardalis, which in Latin means giraffe.

The other is the Lynx, one of only two animal constellations with identical Latin and English names (the other is Phoenix). This celestial feline is rather dim and hard to visualize. Johannes Hevelius (1611-1687) a 17th century Renaissance man placed it in the sky.

Aside from being an astronomer, Hevelius was an artist, engraver, well-to-do man of affairs and a leading citizen of Danzig, Poland.

Interestingly, the old astronomy books and sky charts, which depicted the constellations as allegorical drawings.

placed the lucida (brightest star) of Lynx in the tuft of its tail. From these drawings it would seem that nearby Leo Minor, the Smaller Lion, is about to provoke a cat fight by biting Lynx’s tail!

he openly rejected the new invention

In his star atlas of 1690, he actually tucked a cartoon into the corner of one sky chart showing a cherub holding a card with the Latin motto “The naked eye is best.”

“I am very fond of cats,” he said, explaining his choice. “

I will let this figure scratch on the chart.

which add up to twelve, they form a pattern in the sky.

as it makes it easier for observers to track the movement of the solar system and the stars throughout the course of the year.

The 12 constellations of the Zodiac

At the end and of every year, approximately between November 23 and December 21, the sun passes through the Sagittarius constellation.

The sun transits through the Capricorn constellation in January through February.

It is one of the four cardinal signs and it traditionally marked the winter solstice. The name Capricorn is a direct heritage from the ancient Greeks.

Capricornus is actually the smallest of the 12 zodiac constellations, covers 413.95 square degrees of the southern sky.

In February, it’s Aquarius, or the Water Bear, which is on the path of the sun along the ecliptic. This constellation is one of the oldest we know.

This metaphor meant to them that Aquarius was the bringer of rain.

Covering an area of 979.85 square degrees, Aquarius is the second largest zodiac constellation and the tenth largest constellation in our sky.

Pisces, or “The Fishes”, becomes prominent in the ecliptic every year in the month of March.

The Pisces constellation represents the Greco-Roman goddess Venus, or Aphrodite in its Greek name.

Aries shows up in the month of April.

A constellation is an area on the celestial sphere in which a group of visible stars forms a perceived outline or pattern, typically representing an animal, mythological person or creature, or an inanimate object.[1]

Looking at the Constellations

The first thing you need to know is that constellations are not real!

Where did the constellations come from?

Why did they do that?

Was it for some religious purpose?

Yes and no. Around the world, farmers know that for most crops, you plant in the spring and harvest in the fall.

Some historians suspect that many of the myths associated with the constellations were invented to help the farmers remember them.