humble in victory gracious in defeat 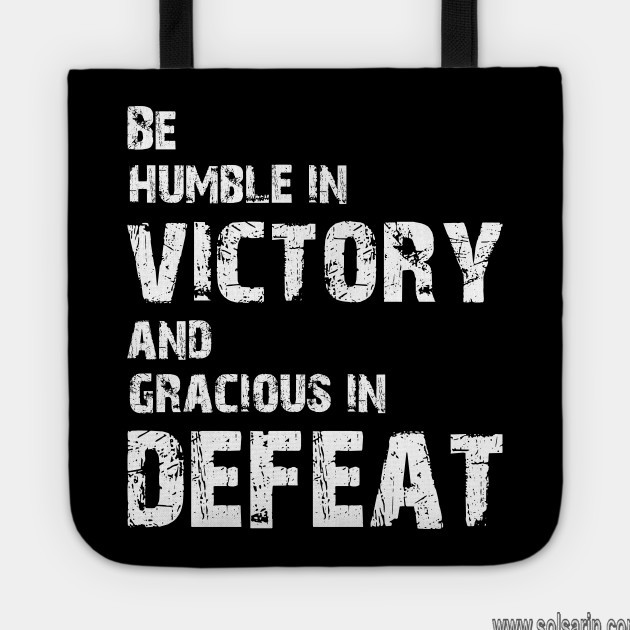 humble in victory gracious in defeat

Hello dear friends, thank you for choosing us. In this post on the solsarin site, we will talk about “humble in victory gracious in defeat”.
Stay with us.
Thank you for your choice.

Humble in Victory, Gracious in Defeat

Like it or not, our culture is deeply steeped in contests and competition. We have many opportunities to practice and model two of the most revered character traits: humility and graciousness.

Mother Teresa considered humility “the mother of all virtues.” She practiced humility everyday of her life as she served the poor and the distressed.

Another epitome of humility was Indian lawyer and political activist, Mahatma Gandhi. Gandhi lived in relative poverty by choice, even making his own clothes. Gandhi was also noted for readily admitting his failings. We need not become an ascetic to exercise humility, however.

Humility isn’t false modesty. Nor is it submission. Humility is best defined as accepting yourself with all your imperfections, recognizing your flaws and limitations. Other hallmarks of humility include being intellectually curious, asking questions, being open to others’ ideas, and willing to admit mistakes and apologize. It is the polar opposite of narcissism.

Being humble when one falters is expected but being humble in victory is less common. More typical, especially among our leaders, is winners who are boastful and self-aggrandizing. Unfortunately, in both politics and business, we often confuse confidence for competence and arrogance for strength.

Humility reminds us that our successes are not our own. No one is victorious without the help of others. The others might be our ancestors or family members and friends, who encouraged us, taught us, inspired us or challenged us.

Humility is not an achievement or a contest. Beware of the person who claims to excel in humility. Practicing humility is a life-long process of acknowledging others, expressing gratitude and seeing oneself as a minor player in a big world. The humble warrior bows to others; the prideful warrior puffs out his chest.

In psychological terms, “loss aversion” may explain why the sting of defeat feels more intense than the thrill of victory. Simply put, we focus more on our losses than on our gains. If someone gives us $100, we may be quite happy for a while but if we lose $100, we likely dwell on the loss for a longer period of time.

No one is born a good loser or a bad loser; these are learned responses to life’s inevitable disappointments and missteps. For this reason, most parents try to teach their children good sportsmanship: win or lose.

We disdain poor sports, also known as sore losers—those who get angry when they lose. In many sports, players who exhibit unsportsmanlike behavior are ejected from the game; sometimes spectators who exhibit this conduct are removed from the sports arena. Yet we can’t easily eject sore losers from all life’s arenas.

Nonetheless, we penalize sore losers by distancing ourselves from them. When possible, we frequently avoid engaging in competitions with known sore losers.

Accepting a loss is difficult enough but being gracious in defeat requires a certain strength of character and concerted practice. To be gracious, one acts with kindness, courtesy, good taste and generosity of spirit.

Sometimes losing is out of our control. Perhaps we don’t get the job we want because of bias or other reasons beyond our awareness. I know I’ve applied for jobs not knowing that someone was already pre-selected. Sometimes our love interests don’t return our affection because of their own limitations.

Granted, there is a certain randomness to disappointment; nevertheless taking a degree responsibility for both victories and defeats is always appropriate, absent boasting, berating or self-flagellation. Acknowledging what went wrong and what worked, regardless of the outcome, puts us on the growth path. Resolving to improve is the next step.

Contrary to what our leaders may say, losing doesn’t make us losers. How one loses makes someone a loser, just as how one wins makes one a winner.

Be humble in victory and gracious in defeat, or shut up

Ever had a game like this? They’re so frustrating.

There was a Fiddlesticks in my last game who acted like a spoiled brat.

We were winning pretty handily thanks to some awful misplays and lack of map awareness from their mid-laner. Things sucked for the enemy team, but they were made worse by our Fiddlesticks who would not stop shit-talking the enemy team.

He gets caught in a stupid situation but his team comes in to save him — “gg noobs baited”. We win a teamfight — “This game is so easy”. We catch and kill them in a desperation baron “lol morons”.

It was awful. I told him in team and all-chat to please be quiet, but he just wouldn’t listen. So I muted him and asked both teams in all-chat to report Fiddle. He didn’t say anything to me, but he was being such an asshole to the enemy team. Don’t kick someone when they’re down. Remember that there are other humans on the other end of those characters, and they have feelings too.

tl;dr crushed a game but felt bad about it because one of my teammates was an asshole to the enemy team. Asked everyone to report him because in League, like in real life, nobody likes playing with a terrible sport.

EDIT: Seems like a majority of people here are awesome 🙂 But there are a few folks who think they are BAMFs and have no empathy for anyone who is not as bad-ass as they are. >.<