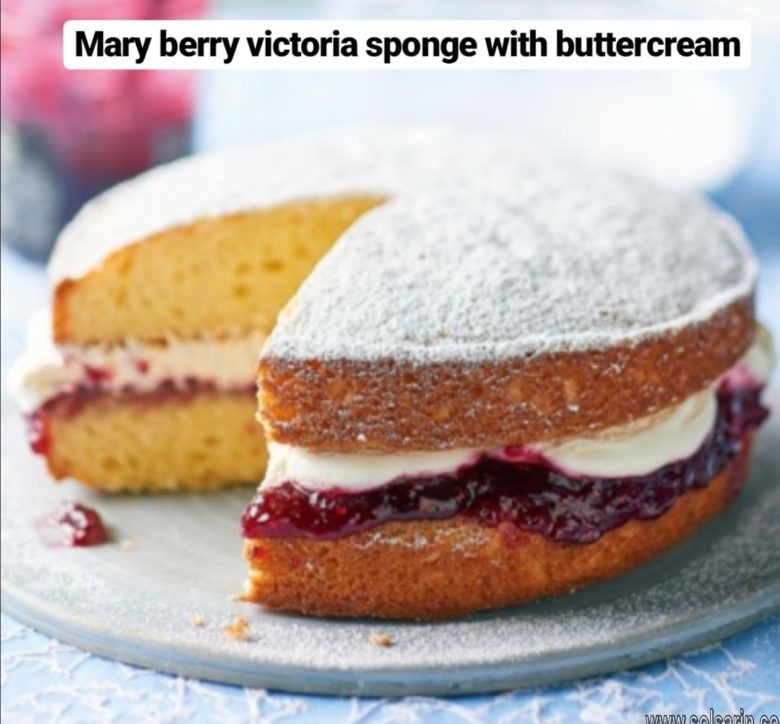 Hi, welcome to solsarin site, in this post we want to talk about”mary berry victoria sponge with buttercream”,

The Victoria sponge cake (a.k.a. Victoria sandwich) was popular with both adults and children during Victorian high tea. Made with equal parts eggs, flour, sugar, and fat, plus baking powder, the Victoria sponge is basically made the same way as pound cake. And while the original Victoria sponge, as Queen Victoria would have it, only consists of two cake layers with a strawberry or raspberry jam center, most modern recipe variations also add a spread of buttercream.

Also, other than a dusting of caster sugar, the cake has no other decorations or icings. However, the cake has spread worldwide, and over the years, variations have developed, mainly regarding the filling. Some of those variations call for such fillings as lemon curd, cream and strawberries, apricot jam, whipped cream, and other flavored creams. Additionally, lemon and orange zest and/or juice are used to flavor the sponge.

Mix all the cake ingredients together

Please do not be tempted to substitute the butter for margarine in the buttercream part of the recipe. The butter texture is essential to this bit but do make sure the butter is softened before starting the mixing. (There is a vegan option however which I talk about below).

I have swapped between using granulated (regular) and caster (superfine) sugar in this recipe my whole life. I do generally keep caster sugar for baking and granulated for in my tea but you can really use either/or.

Do use whatever jam you prefer. If that’s pumpkin & ginger jam, then go for it! Lemon curd also work brilliantly too. Obviously I highly recommend using my Homemade Strawberry Jam.

Mary Berry’s Lemon Victoria Sandwich recipe was specially commissioned by the GDST for the 140th anniversary of the Girls’ Day School Trust and appeared in issue 12/13 of Verve Magazine (also available online here).And Mary Berry is a GDST alumna, and all girls were given a postcard with the recipe to celebrate the Bake Off event (the final of which was just by one of the hosts of The Great British Bake Off, Mel Giedroyc – another GDST alumna!). I used to teach music at Central Newcastle High School which makes me an ‘Old Girl’, and as I love baking I just had to try out this recipe. If you make your own lemon curd, it will taste even better! I also added buttercream, which is not in the original recipe.

2. Cream the butter and sugar together in a bowl. Beat the eggs and add the grated lemon zest and mix well. Pour the mix in a little at a time and mix well. Sift in the flour and baking powder and combine together. (Mary’s original recipe suggests using an electric whisk – put all ingredients into a bowl and beat for a couple of minutes).

3. Divide the mixture evenly between the two tins and level with a spatula or the back of a spoon. Bake in the oven for about 25 minutes or until well-risen and golden.

4. Leave the cakes to cool in the tins for a few moments then run a blunt knife around the edge of the tins to free the sides of the cakes. Turn the cakes out, peel off the paper and leave to cool completely on a wire rack.

5. As the cakes cool, make the buttercream by creaming together the butter and icing sugar. Add the milk and lemon zest and beat until smooth.

6. Choose the cake with the best top, then put the other cake top downwards on to a serving plate. Spread with the lemon curd and then the buttercream. Put the other cake on top and dust with icing sugar. Put the kettle on, cut a big slice and enjoy! If you’re not a fan of lemon, you could always try out my Classic Victoria Sponge. Either of these cakes are best enjoyed with a cuppa!

This easy-to-make and deliciously moist chocolate cake is our go-to recipe for any special occasion. The fluffy sponge is topped and sandwiched together with chocolate ganache, made with fresh double cream and melted chocolate. It also requires one extra special ingredient – apricot jam. This fruity spread is used to form a barrier between the cake and the icing, ensuring a smooth finish. Mary Berry told us: “When icing a cake with fondant, seal the top with apricot jam first to prevent crumb contamination.” This recipe will serve six people. It takes 50 minutes to prepare and bake.

For the chocolate icing:

Preheat the oven to 180C, gas 4. Beat together the eggs, flour, caster sugar, butter, and baking powder until smooth in a large mixing bowl.

Put the cocoa powder in a separate mixing bowl, and add the water a little at a time to make a stiff paste. Add to the cake mixture.

Turn into the prepared tins, level the top, and bake in the preheated oven for about 20-25 mins, or until shrinking away from the sides of the tin and springy to the touch.

Leave to cool in the tin, then turn on to a wire rack to become completely cold before icing.

To make the icing: measure the cream and chocolate into a bowl and carefully melt over a pan of hot water over a low heat, or gently in the microwave for 1 min (600w microwave). Stir until melted, then set aside to cool a little and to thicken up.

To ice the cake: spread the apricot jam on the top of each cake. Spread half of the ganache icing on the top of the jam on one of the cakes, then lay the other cake on top, sandwiching them together.

Use the remaining ganache icing to ice the top of the cake in a swirl pattern. Dust with icing sugar to serve.

For the final technical challenge Mary Berry asked the bakers to make this simple sponge with homemade jam and buttercream – without a recipe. We won’t be so unkind. Mary’s perfect Victoria sponge recipe with buttercream is yours. For this recipe you will need two 20cm/8in sandwich tins, an electric mixer and piping bag fitted with plain nozzle.