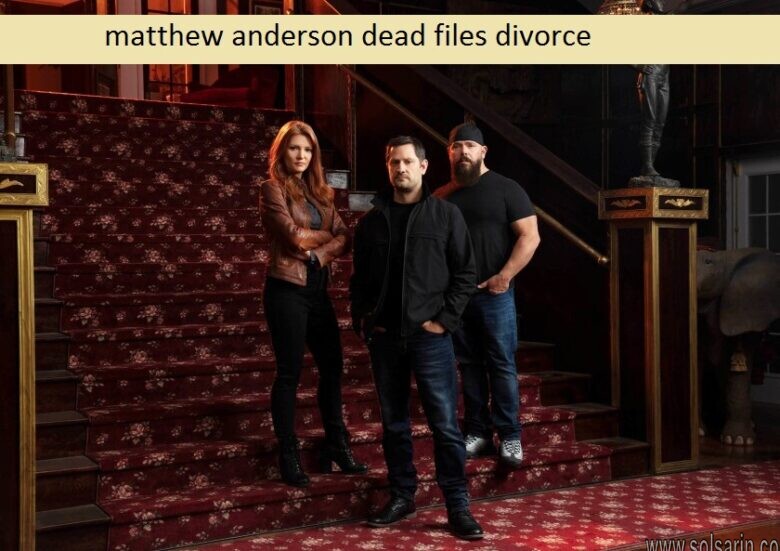 Hello dear friends, thank you for choosing us. In this post on the solsarin site, we will talk about “matthew anderson dead files divorce”.
Stay with us.
Thank you for your choice.

In a year of loss, I found comfort and connection in an unlikely place: paranormal TV

What have I gained during the COVID-19 pandemic, aside from weight and a new appreciation for grocery delivery services?

The knowledge of what happened to someone I cared for dearly, yet lost track of, someone whose memory I’d lost until he returned to me as a ghost, courtesy of paranormal TV.

No doubt, cabin fever has driven me mad, but I swear this redemptive tale of trash TV is true. In the Before Times, work was so hectic that I didn’t have time to watch anything but new,

shiny prestige TV series for review or write about the endless stream of political controversies playing out on our screens.

Then came the first safer-at-home order, which meant sheltering in a cramped home with my gangly teenage son, work-at-home husband, two lovable, clumsy pit bulls and one prickly,

harder-to-love cat. By the time summer rolled around, we didn’t just need to retreat from the virus outside, we also needed space from one another.

More and more time was spent in separate rooms — watching TV, of course.

Having already burned through new shows like “Never Have I Ever,” “Upload” and Season 2 of “Ramy,” I caught up on or rewatched series like “Sons of Anarchy” and “Breaking Bad”

(it never gets old). In keeping with 2020, things devolved from there.

so I turned to Animal Planet and Nat Geo Wild. When meerkats and wildebeests failed to distract, the Travel Channel and TLC offered another way to burn away the day: paranormal TV.

A show like “Ghost Hunters” felt oddly topical, or at least its themes seemed familiar: Regular folks were being traumatized by an invisible, deathly threat; a phantom that seeps under doors and through vents undetected.

And there’s a series for every terrifying situation. Families who swear their homes have been taken over by spirits, poltergeists, shadow people or demons call upon “The Dead Files” team.

Steve DiSchiavi is a retired NYPD homicide detective. Amy Allan is a paranormal researcher and psychic. He interviews the living and researches tangible records of properties and people.

She sees and speaks with the dead. They investigate each case separately, then meet with the victims and compare notes at the end of the episode. The aggrieved are advised on who or what is wreaking havoc and are given advice on what to do — sprinkle salt around the perimeter, call a shaman, summon a priest, sell the house.

These burly, tattooed guys grow increasingly jittery as the night wears on, jumping at the sound of creaking floorboards, recoiling from their own shadows.

Their arsenal of ghost-busting equipment includes the Talker (a.k.a. an inductive sensor), which captures electromagnetic waves and converts them into words.

An E-field Pod detects the electric field that surrounds a static charge. A simple voice recorder is a “spirit sensor.”

During playback, they often hear otherworldly threats — “Get out now!” — where the rest of us hear static. The spirits never seem to fully materialize.

and unlike Scooby-Doo, the haunting never turns out to be a scheme cooked up by the innkeeper.

“Long Island Medium” Theresa Caputo purports to help the living overcome the loss of loved ones by using her abilities to channel communication between this life and the afterlife.

The grieving frequently report feeling a sense of peace after her readings. The show “helped” reconnect them with loved ones. I have “Ghost Adventures”

— the Haunted Hollywood edition — to thank for that. The episode (a repeat, no less) reunited me with a long-lost late friend, Marshall Wyatt.

I’d lost touch with Marshall nearly 25 years ago, when he was in his 80s. I assumed I’d never hear of him again. He was a barkeep and live-in caretaker at the American Legion Hollywood Post 43, an architectural marvel from grander times, described by L.A. Weekly as “a beautiful and ostentatious Egyptian Moroccan revival building on Highland Avenue a stone’s throw from the venerable Hollywood Bowl.” He worked there for 31 years and had the distinction of being the only soul to live full-time on the premises until his death at age 89, which I learned from the show was on March 24, 2000. He now apparently haunts the place.

Marshall has haunted my memory since I met him in an earlier “uncertain time,” just after the ’92 riots.

Or was it the ’94 Northridge quake?

Regardless, Hollywood was a different place than it is today. It was seedier, cheaper and home to plenty of downscale establishments where Marshall and his peers felt welcome. They were called dive bars.

The Powerhouse was on Highland, just north of Hollywood Boulevard. I bartended there, but not at night when hipsters who’d rediscovered forgotten watering holes like the Firefly or Boardner’s would come rolling in. I started my bleary-eyed shift at 9 a.m.

Marshall was my “manager,” but in reality, he was a friend of the bar’s owner, there to help

the new girl.” Stout and tough, he’d totter down Highland with the bar’s keys and cash bag (the owner didn’t trust me yet), open the back door and help set up.

Then he’d sit at the bar as the morning regulars began streaming in, taking their places on the wobbly barstools and cracking pleather booths. The older crowd came in first with their coffees from the nearby McDonald’s. They were all friends of Marshall’s, and most didn’t drink anymore,

but they’d meet there anyway to compare notes about what they’d heard on their police scanners the night before. Stabbings, homicides, muggings — ’90s L.A. was the gift that kept on giving.

One had worked at the studios back in the day, building sets. He claimed to have drunk with Clark Gable. Another was a former Brown Derby waiter who was still bitter that Mickey Rooney had stiffed him on a tip more than once.

when I left L.A. for New York

I lost touch with Marshall when I left L.A. for New York and a career in writing. According to “Ghost Adventures,” he was nearly 90 when he died after a night of drinking and playing poker. He’d been tying one on in the hall’s Memorial Clubhouse before suffering a stroke in the southeastern stairwell. He died doing what he loved. We should all be so lucky.

The Dead Files is an American paranormal television series that premiered September 23, 2011, on the Travel Channel. The program features physical medium Amy Allan and former NYPD homicide detective Steve DiSchiavi, who investigate allegedly haunted locations at the request of their clients in an effort to provide proof of paranormal activity. Each partner is depicted exploring the case independently of the other, so as not to influence their portion of the investigation. They, along with their client(s), then come together during the program’s final segment, the “reveal,” when they compare their findings with one another.