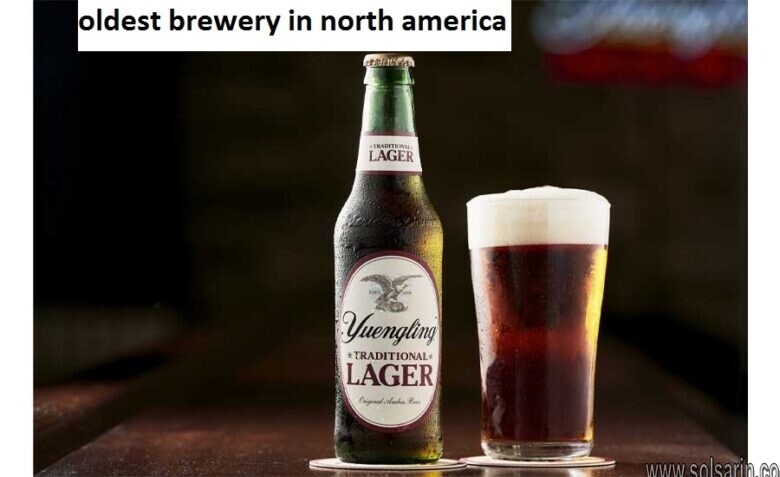 Hello dear friends, thank you for choosing us. In this post on the solsarin site, we will talk about “oldest brewery in north america    “.
Stay with us.
Thank you for your choice.

Often played at weddings, the 1979 No. 1 chart-topping hit “We Are Family,” by Sister Sledge declares “We are family, I got all my sisters with me, We are family, Get up everybody and sing.” Also keeping it “all in the family” are the four Yuengling sisters ― Jennifer, Debbie, Wendy and Sheryl ― who along with their dad, Dick, are leveraging six generations of brewing expertise while charting the continued long-term success of “America’s Oldest Brewery,” D.G. Yuengling & Son Inc.

Founded in 1829 in the coal-mining town of Pottsville, Pa., by Wuerttemberg, Germany immigrant David G. Yuengling, the brewery’s original moniker was Eagle Brewery, which debuted the iconic eagle and barrel icon on its labels to represent purity, quality and strength.

After David’s son, Frederick, Yuengling’s great, great grandfather, joined his father as a partner, the brewery officially changed its name in 1873 to the aforementioned D.G. Yuengling & Son, Inc.

The brewery’s 192 years of success is built on a firm foundation of core brands in its diverse and growing portfolio. These include its flagship Yuengling Traditional Lager, which represents more than 75 percent of brand sales, Light Lager, Black & Tan, Yuengling Hershey’s Chocolate Porter, and three of its recent new additions, Yuengling Golden Pilsner, Raging Eagle Mango Beer and FLIGHT by Yuengling, which is billed as “the Next Generation of Light Beer.”
To attract new, more health-conscious beer drinkers, the low-carb, low-calorie FLIGHT by Yuengling is an upscale light beer, with great taste and stats that is a step up from the competition, Yuengling explains.
The easy-drinking, clean, crisp 4.2 percent alcohol-by-volume (ABV) FLIGHT contains 95 calories and 2.6 grams of carbohydrates in each 12-ounce glass bottle, the company says.

Yuengling, the anglicized version of Jüngling, is the German word for a “young person” or “youngster.” While the company belies the young title, there’s plenty to glean from the company’s rich 192-year history.

For instance, built in 1831, the original, historic brewery on Mahantongo Street still is operational and open for free 30-minute tours and tastings for legal-age consumers with ID.

Built out several times through six generations of leadership, the 275,000-square-foot, red-bricked brewery primarily produces Yuengling in cans. It also is the site of the company’s iconic brew house with stained glass ceilings and stainless-steel kettles along with historic caves that were hand-dug in the 1800s and used for beer fermentation before refrigeration. Across the street, there’s also a retail gift shop and tasting room where visitors are encouraged to “grab a cold Growler of their favorite Yuengling to go.”

Continuing its expansion efforts, in 1999 D.G. Yuengling & Son Inc. purchased the Stroh brewery in Tampa, Fla., which enabled the brewer to meet demand in its northeast markets and to produce and ship beer up north until the new Mill Creek brewery became operational, Yuengling says.

In addition to its new joint venture, D.G. Yuengling & Son Inc. at its core, maintains a strong family culture while it focuses on future growth opportunities and telling the ripe story of America’s Oldest Brewery.

Coming down the pipeline is the revitalization of the Tampa brewery campus. Slated to open in 2022, the goal is to create a first-class destination to experience the brewery’s brands and more.

Amenities will include a small-batch pilot brewing system; a restaurant serving fresh, local cuisine; an outdoor recreation area and beer garden; a multi-use concert and entertainment pavilion; an onsite 15-story hotel; and a gift shop and coffee bar. Consumers also can learn more about the history of America’s Oldest Brewery through digital interactive displays, artifacts and advertising memorabilia.

In 2016, the National Academy of Sciences released an archeological study that found evidence of the earliest known brewery in Mijiaya, China. Stanford archeologists found starches such as mountain yam, broomcorn millet and Job’s tears (millet), along with barley in the residue of ancient pottery. Today, Jing-A Brewing Co. out of Beijing, China, created Mijiaya Neolithic Ale (above), a 3.7 percent sour ale, using the same ingredients that were found at the site.

Two years later in 2018, a much older 13,000-year-old brewery in Israel was discovered. Similar to the Mijiaya site, researchers found residue in stone mortars buried in the ground at a burial site for semi-nomadic hunter-gatherers called the Natufians, who lived between the Paleolithic and Neolithic periods.

This beer would be much different than the effervescent golden beverage we know today, researchers say. It would have much lower alcohol content and a porridge-like consistency.

While that might not sound particularly palatable by today’s standards, if it’s beer, it’s worth a shot!

Twenty-five years after the city was settled, Englishman Davis Embree opened Cincinnati’s first commercial brewery on the banks of the Ohio River in 1812. He made classic porters and ales that never quite got popular, and the brewery closed in 1825. Shortly after, waves of German immigrants started establishing roots a few miles north in a neighborhood that would become the heart of the region’s brewing industry.

The Golden Age of Beer

In 1860, as many as 36 breweries operated in Cincinnati. By 1889, a fewer number of breweries (23) produced even more beer, collectively brewing 35,700,000 gallons of suds drunk the world over (Christian Moerlein Brewing Company exported beer as far as South America and Europe). In fact, so much beer was made and consumed in Cincinnati that in 1890 it was dubbed the “Beer Capital of the World.”

The vast majority of Cincinnati’s pre-Prohibition breweries were in Over-the-Rhine, clustered together along McMicken Avenue and the canal. From 1875–1900, 17 operated in Over-the-Rhine and the West End. While this historically German area boasted the most breweries per capita, it wasn’t the only neighborhood where the air smelled of liquid bread and the beer flowed freely.

Back in Over-the-Rhine, a more intact historic brewing district astounds with its architectural prowess. As it turns out, Cincinnati’s brewing industry was as much about beer as it was about world-class architecture.
Brewery buildings were considered extensions of the beer, and architectural details were often exaggerated in advertisements. That’s not to say the expansive brewing complexes weren’t lavish in real life. In 1893, George Wiedemann hired Cincinnati architects Samuel Hannaford and Sons (of Music Hall fame) to construct a new bottling facility. The building, since torn down, once towered majestically over Sixth and Columbia Streets in Newport.
The most intact building remaining is the old Felsenbrau-Clyffside Brewery (1887). From across the street, gaze at the meticulously carved cherubs and six-point brewer’s star on the roof. Inside, notice the beer barrels etched into the stair posts, and gilded steel beams that sparkle in the natural daylight.
Considering it’s been abandoned off and on for a few decades now, this building is in pretty remarkable shape.
What lies beneath is in even better shape.

The original Bavarian Brewery is the only thing that remains of Northern Kentucky’s brewing heritage. You can find the faded yellow building, complete with original brickwork, at 528 W. 12th St. in Covington..

And beer isn’t the only thing brewing in Northern Kentucky.

On a brewery tour in Over-the-Rhine, see one of the largest collections of pre-Prohibition brewery architecture.

Have a pint in the former Kauffman malt house.
now home to the taproom of the Christian Moerlein Brewing Company and owned by modern-day beer baron Greg Hardman. Given the region’s storied brewing history, collecting vintage beer memorabilia, or breweriana, is also a popular hobby here.

Along with the existing tours, the Brewing Heritage Trail highlights historic buildings and sites in Over-the-Rhine. You can download an app to experience a self-guided tour of the area. And be sure to stop by some of the local breweries where you can take tours and clink pints.