sb-9 when is a sailboat the stand-on 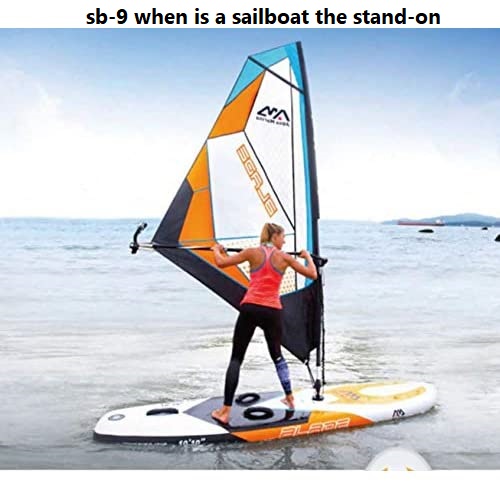 sb-9 when is a sailboat the stand-on

Hello dear readers. In this post on Solsarin we are going to talk about ”sb-9 when is a sailboat the stand-on“ . Continue reading to find the answer. Please write your comment, Thanks for your attention.

In the navigation rules, what is the duty of the stand-on boat?

The duty of the Stand On vessel, per Rule 17 of the COLREGs, is to maintain her course and speed so as to allow the Give Way vessel time and space to plot a safe course of action and keep well clear of her.

The Stand On vessel’s obligations under Rule 17 require her to maintain course and speed, but allow her to take action to avoid collision should it appear that the Give Way vessel is not taking appropriate action.
Furthermore, should it become clear that collision cannot be prevented by the action of the Give Way vessel alone, then Stand On must take action to avoid collision.

The salient point of Rule 17 is that Stand On does not confer any Right of Way privilege, rather Stand On is an obligation, initially to hold steady and allow Give Way to maintain a safe distance, but allowing, and then requiring, Stand On to depart from the requirement to hold steady, should this bring her into danger.

Finally, we should note the circumstances under which Stand On is applied:
1) ONLY between vessels in sight of one another. There is no Stand On in Restricted Visibility!
2) ONLY in situations involving a risk of collision between two vessels, where one has been directed to keep clear of the other. That is, Rules 11-18 of the Steering and Sailing Rules.
In any other collision situation not specifically described in Rules 11-18, all vessels must act in accordance with Rule 8.

Why is a submarine called a boat and not a ship?

There is a lot of misinformation in this thread … unsupported assertions offered as fact.

And for god’s sake PLEASE stop offering the ship-can-carry-a-boat-but-a-boat-can’t-carry-a-ship nonsense. That is an explanation suitable only for children and for the painfully ill-informed.

There is not one definitive reason why submarines are called boats, but by tradition they have been referred to as boats and there are several likely origins:
– The first practical submarines were developed in the 19th century as small vessels for 1-4 crew that were typically transported aboard larger vessels and deployed from them. Typically they had extremely short range and were far from autonomous.
– Even when submarines became large enough to be considered more ship than boat, there remained a self-deprecating pride among the crews to continue using the diminutive term.
– The German term for a submarine is unterseeboot which became anglicized to U-Boat, a term that was popularized in WW1 and WW2.

The point under dispute is the repeated assertion that the colloquial use of the term “boat” for submarines somehow renders them as “not ships” in any definitive sense.

I maintain that since neither term boat nor ship has a definitive, authoritative definition beyond intuitive and colloquial use, that such an assertion is specious and inaccurate.

The sole legal term for these watercraft is “vessel”, as specified by IMO references and port state regulations which carry the weight of law. The International Maritime Organization refers to “vessels” which are defined as follows:
“vessel means a boat, ship or craft designed, used or capable of being used solely or partly for navigation in, on, through or immediately above water, without regard to method or lack of propulsion, and includes such a vessel that is under construction. It does not include a floating object of a prescribed class.”

I’m not aware of any legal definition that differentiates a “boat” from a “ship” nor am I aware of any need to differentiate legally between the two. In most cases (though not all) a “boat” refers to various forms of small craft, typically without substantial live-aboard crew and deep-sea capability … although there are all kinds of exceptions to those constraints.

They are all – boats and ships – defined legally as “vessels” and they all carry various incremental responsibilities as appropriate to their voyage, their capacity (for personnel/cargo), their mission, their propulsion, and yes their size (typically defined by length and/or tonnage).

Neither boat nor ship possesses a clear definition that distinguishes the two by any quantitative criteria such as length, displacement, configuration, function, crew size, range, area of operation etc.
The only criterion that comes close is “tonnage” (a measure of internal volume) whereby 15 Gross Tonnage and under need not be registered; however there are too many examples that disqualify 15GT as distinguishing definitively between a ship and a boat.

Until anybody can produce a definitive document to the contrary, they are simply offering bold (but unsupported) assertions in opposition to my evidence.\

Overtaking: The vessel that is overtaking another vessel is the give-way vessel, regardless of whether it is a sailing vessel or a power-driven vessel. The vessel being overtaken is always the stand-on vessel.