the race is not given to the swift 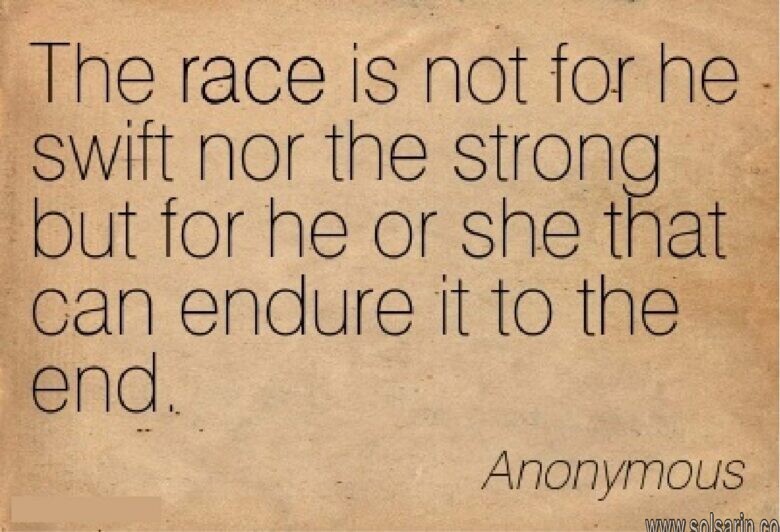 the race is not given to the swift

Hi dear friends,  solsarin in this article is talking about “the race is not given to the swift”.

Explanation and Commentary of Ecclesiastes 9:11

There are laws created by God that generally govern the universe. However, sometimes “chance” happens, and what seems as though it should be, isn’t what is. Occasionally the fastest runner falls before the finish line and various other chances and oddities cause surprise results in life. The world attributes this to bad luck, but we would do well to trust in the sovereignty of God, who ultimately is in charge of all outcomes.

A principle that runs right through the whole Bible is the principle of stewardship. Christians never have wonder if they should do their best at what they endeavor, for that is what we are called to do. But a Christian should not generally be too concerned with the outcome, as even the lot cast will fall where the Lord wants it (Pr 16:33).

God will not hold us accountable for outcomes, only for our efforts. The steward who buried his one talent in the yard proved that he did not know or trust the master and was punished accordingly. Had he come and said, “I did business with the talent, but I failed,” he would have heard, “Well done, good and faithful servant, come and share in your master’s happiness” (Mt 25:21).

Solomon may have been complaining about the futility of life, but Christians should simply take it as a reminder to work hard but trust God for all the results.

Breaking Down the Key Parts of Ecclesiastes 9:11

#1 “I have seen something else…”
Solomon is considered to be one of the wisest men who ever lived “under the sun.” The Bible records that his wisdom was supernatural (1 Kgs 3:1-15).

Solomon not only saw many things under the sun, but he sought to understand them and live accordingly. He ultimately failed on a key point, giving in to his flesh when it came to his many wives and concubines who ultimately led him to worship idols and lose a large portion of the kingdom for his son.

#3 “The race is not to the swift or the battle to the strong, nor does food come to the wise or wealth to the brilliant or favor to the learned;”
In every contest, whether athletic, martial or the contest between life and death, there are odds. Occasionally, the long odds win. God is sovereign over all of this, and his plans will always be accomplished, if not always understood.

#4 “but time and chance happen to them all.”
Time and chance are logical reasons why what should happen, doesn’t always. If something should happen 90% of the time, nine times it might happen just as it should. But try it on the tenth time, and the result will be different. This is because, slim though the “chance” might be, time will widen the possibility of the oddity.

I love Hebrews 12:1-2.  I first turned my attention to it as result of a conversation I had with Pastor Chris Boston of the Lamb of God Missionary Baptist Church (thanks Chris!). It tells us to look back on the testimony and witness of those who came before us and, drawing on that “cloud of witnesses”, drop everything and every sin that holds us back.

Then God tells us to run – with perseverance – the unique race that God has specifically marked out for each one of us.

Watch the video of this amazing young runner. It is not over until it’s over. She perseveres and is victorious in the end.

But that’s not all. Watch it again – carefully. Watch her face in the last 30-40 seconds of the video. She is not anxious, she is not fretting. She does not even appear aware of her surroundings. No, she is running her race. She is not worried about anyone or anything. Look . . . at first she doesn’t even realize she’s won. So it will be for you.

Don’t worry about what the world or anyone else says or does. Get clarity about what God has in store for you.

For they [God’s people] did not gain possession of the land by their own sword, nor did their own arm save them; but it was Your right hand, Your arm, and the light of Your countenance, because You favored them.

The world tells you that those with the qualifications, talents and experience get the jobs, promotions and high salaries.

My friend, though you live in this world, as God’s beloved child, you need not be limited by it. You have God’s favor—His unmerited, unearned, undeserved grace! Ecclesiastes 9:11 tells us, “The race is not to the swift, nor the battle to the strong…” This means that even if you are not the smartest, strongest, most knowledgeable or best looking in the natural, God can still give you good success when you depend on His grace.

It is His right hand, His arm and His favor that provide for you, fight for you, defend you and give you increase.

So instead of mulling over your “disqualifications”, be conscious of God’s favor on you. Smile and say, “God’s favor is all over me because of Jesus. I expect good things to happen to me today!” Beloved, be conscious of His favor. Believe it. Confess it. And you will experience it!

NIV
I have seen something else under the sun: The race is not to the swift or the battle to the strong, nor does food come to the wise or wealth to the brilliant or favor to the learned; but time and chance happen to them all.

ESV
Again I saw that under the sun the race is not to the swift, nor the battle to the strong, nor bread to the wise, nor riches to the intelligent, nor favor to those with knowledge, but time and chance happen to them all.

KJV
I returned, and saw under the sun, that the race is not to the swift, nor the battle to the strong, neither yet bread to the wise, nor yet riches to men of understanding, nor yet favour to men of skill; but time and chance happeneth to them all.

NKJV
I returned and saw under the sun that— The race is not to the swift, Nor the battle to the strong, Nor bread to the wise, Nor riches to men of understanding, Nor favor to men of skill; But time and chance happen to them all.