what are the dots on dice called? 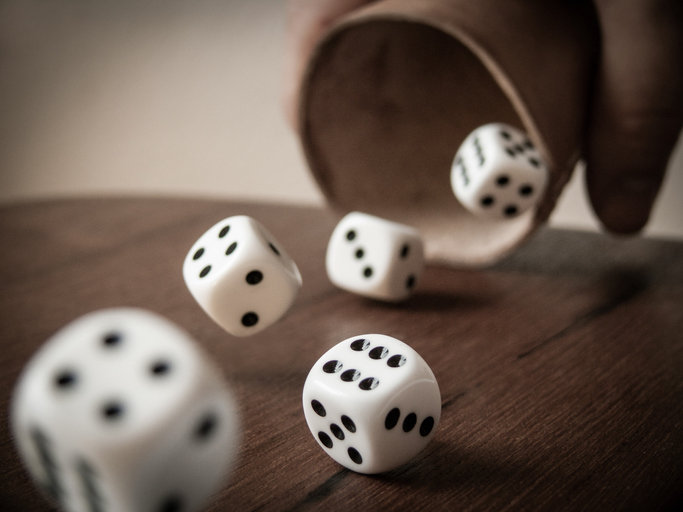 what are the dots on dice called?

Hello dear friends, This article on Solsarin is going to give you some information about “what are the dots on dice called?”.

Pips are small but easily countable items. “Pip” has been used not only to denote the dots on dominoes but also the dots on dice, as well as the marks on playing cards and sometimes as a synonym for “dot” in morse code.

The small, hard seeds of some fruit, such as those in an apple, orange, or lemon are also called “pips”.

Ordinary dice, the standard dotted cubes we all know, are not as simple as they first seem.An ordinary standard die is a regular cube with its six sides numbered with dots from 1 to 6 with all opposing sides adding up to 7. The ordinary dice commonly available are not as precisely made as the perfect dice casinos use and are imperfect dice, known as drugstore or candy-store dice in the US and shop dice in the UK. They usually have recessed spots and often have rounded corners so they roll easier. Unless you are a serious gambler these are perfectly adequate for social games.

Plastic is the most common material commercially used but it can be found in many other materials; wood, stone, glass, metals, any material imaginable. The standard Western size is just over half an inch square, but miniature dice of a one-quarter inch square and oversize or giant dice from three-quarters up to an inch across are also commonly available. The dots on the faces of a die are called spots in the USA but are sometimes referred to by the more British term, pips.

The standard factory-made plastic shop or drugstore dice commonly available will favor the high numbers (6 then 5 then 4) because these sides are lighter than the opposite low number sides due to the indentations of the spots. This bias will only become apparent after a very considerable number of throws.

There are tactile/brail dice available with recessed faces and raised spots that can be read by touch. Opposite faces of a die should add up to 7. However, there are two ways of arranging the faces, one a mirror image of the other, so there are left and right-handed dice.

Today Western dice all have the same face arrangement. If the 1-spot is face up and the 2-spot is turned to face the left then the 3-spot is to the right of it. Chinese dice will have faces the opposite way round. Japanese dice are arranged like Western dice but like other Asian dice, they will have a very large and deep 1-spot painted red. Chinese and Korean dice will have a red 4-spot as well as the 1.

The Chinese custom of painting the 4-spot red is said to have originated when an Emperor playing sugoruku with his queen was about to lose and desperately needed fours to win the game. He cried out, threw the dice and they came up accordingly. He was so glad that he ordered that fours be painted red from then on. The emperor is said to have been Lo Ling Wong who reigned under the title Chong Tsung (AD 684 – 701) during the Ming dynasty.

Whether this story is true is questionable and it has been suggested that the 4-spot is painted red because dice were imported from India where red fours are also traditional. The reason why the 1-spot is large and painted red is not clear. It is said the stark combination of black and white would be unlucky, red being considered very lucky in China. Another possibility is that it counters and balances the die, compensating for the opposite 6-spot indentations.

Indian dice are also traditionally said to be spotted black and red. Why isn’t known but Indian dice traditionally have the 3 and 4-spots painted red? The ancient Hindu Sanskrit, Mahabbarata, refers to “dice, dotted black, and red.” Dice from Pakistan are right-handed like Western dice and are traditionally marked with a red 6-spot as well as a standard size red 1-spot. Another feature of Asian dice is the orientation of the 2 and 3-spots. You mayfind the spots on either the 2-spot or both the 2 and 3-spot faces arranged vertically/horizontally rather than diagonally as on Western dice.

How many dots are on each side of the dice?

A traditional die is a cube, with each of its six faces showing a different number of dots (pips) from 1 to 6. When thrown or rolled, the die comes to rest showing on its upper surface a random integer from one to six, each value being equally likely. There are 21 dots on one dice: 6+5+4+3+2+1= 21.

The most common type of dying is a six-sided cube with the numbers 1-6 placed on the faces. The value of the roll is indicated by the number of “spots” shown on the top. For the six-sided die, opposite faces are arranged to always sum to seven.

What is a dot on a dice called?

On dice, pips are small dots on each face of a common six-sided die. These pips are typically arranged in patterns denoting the numbers one through six.

How many dots are on a 5 dice?

How do you draw a dot on a dice?

All the dots are painted on a die so that the sum of the numbers on two opposite faces always equals seven. Paint two dots on one of the faces between the single-dot side and the six-dot side. These two dots should be placed with one in the top-left corner of the face and the other in the bottom-right corner.

What are the dots on a domino called?

Each domino is a rectangular tile with a line dividing its face into two square ends. Each end is marked with a number of spots (also called pips, nips, or dobs) or is blank. The backs of the dominoes in a set are indistinguishable, either blank or having some common design.

What order are the dots on a dice?

What is the largest-sided die?

All dice are polyhedra (Greek for many-sided), but the D120 is a special variety called disdyakis triacontahedron. It features 120 scalene triangular faces and 62 vertices. That creates the largest number of symmetrical faces possible for an icosahedron and the biggest, most complex fair dice possible.

The Secret to Dice

Dice are a fun toy we can use in a lot of different games. That’s because when you throw dice, you don’t know what will happen. A die is just a cube, a shape that has 6 flat square sides, or “faces.” Each face has some number of dots on it: one side has 1 dot, another has 2 dots, and so on up to 6 dots. The die can land with any of those faces pointing up. That tells you how many spaces to move in a board game, or whether you rolled a bigger number than your friend. And here’s a cool fact: on most dice, the two sides opposite each other always add up to 7. Find a die or two and check it out!

Wee ones: Find a box in your room that has 6 faces (flat sides). See if you can count them all.

Little kids: One side of a die has 2 rows of 3 dots in each. They’re sometimes called “railroad tracks.” How many dots are there in total?  Bonus: Opposite sides on a die add up to 7. If you’re looking at the side with 5 dots on it, how many dots are on the opposite side?

dice, singular die, small objects (polyhedrons) used as implements for gambling and the playing of social games. The most common form of dying is the cube, with each side marked with from one to six small dots (spots). The spots are arranged in conventional patterns and placed so that spots on opposite sides always add up to seven: one and six, two and five, three and four. There are, however, many dice with differing arrangements of spots or other face designs, such as poker dice and crown and anchor dice, and many other shapes of dice with 4, 5, 7, 8, 10, 12, 16, and 20 or more sides. Dice are generally used to generate a random outcome (most often a number or a combination of numbers) in which the physical design and quantity of the dice thrown determine the mathematical probabilities.

In most games played with dice, the dice are thrown (rolled, flipped, shot, tossed, or cast), from the hand or from a receptacle called a dice cup, in such a way that they will fall at random. The symbols that face up when the dice come to rest are the relevant ones, and their combination decides, according to the rules of the game being played, whether the thrower (often called the shooter) wins, loses, scores points, continues to throw or loses possession of the dice to another shooter. Dice have also been used for at least 5,000 years in connection with board games, primarily for the movement of playing pieces.