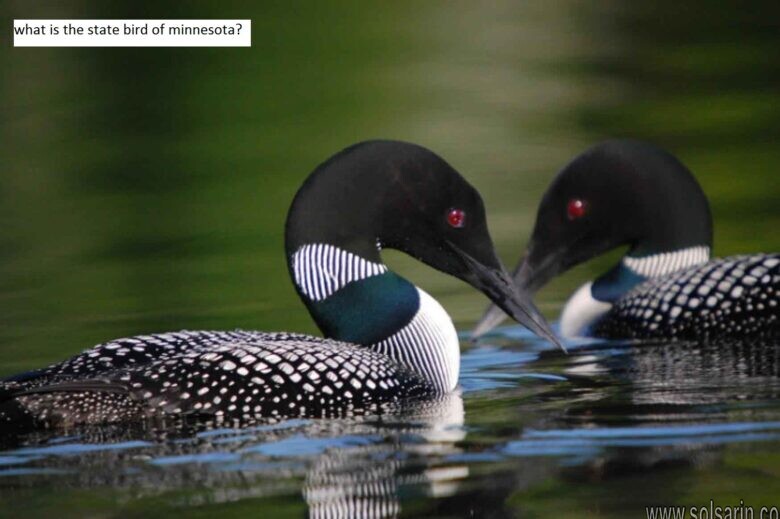 Hello dear friends, thank you for choosing us. In this post on the solsarin site, we will talk about ” what is the state bird of minnesota?”.
Stay with us.
Thank you for your choice.

what is the state bird of minnesota

The loon (Gavia immer) became Minnesota’s state bird in 1961. It is known also as the common loon. Loons are large black and white birds with red eyes. They have wingspans up to five feet and body lengths up to three feet.

The common loon (Gavia immer) was adopted as the official state bird of Minnesota in 1961.  All State Birds

Loons are known for their cries, wails, and yodels – their eerie, echoing calls are a distinctive feature of Minnesota’s northern lakes. Approximately 12,000 of these unique birds make their summer homes in Minnesota.

Loons are large black and white birds with red eyes; they have wingspans up to five feet and body lengths up to three feet.

Although clumsy on land, loons are high-speed flyers and excellent underwater swimmers (they will dive to depths of 90 feet in pursuit of fish).

It’s such a thrill to hear the call of a loon out on a lake and, finally, to get a glimpse of one of these stunning birds.

The official name of the Minnesota State Bird is the “Common Loon” which seems far from the right name for such an uncommon bird.

large bird is about thirty inches in length

This very large bird is about thirty inches in length and has a wingspan of about five feet. An adult loon may weigh anywhere from six to thirteen pounds.

If you spot a loon on a Minnesota lake, one of the first clues that you are indeed looking at the state bird of Minnesota is its iridescent, greenish-colored head. A swimming loon is somewhat “hidden” on the lake by its black back.

and wings that are speckled with white spots. This coloring blends with a sun sparkled lake surface. The loon completes its outfit with a black .

and white striped band around its neck, an under coat of white feathers all accented with beautiful red eyes. This fancy finery is worn by the loon throughout the breeding season.

When autumn arrives, the loon dons more somber garb. Brown feathers take the place of the black and white summer coat; the feathers on the throat become white to match the belly and the flashing red eyes turn brown.

Loon chicks are black and fluffy at first and, as they grow, come to look very much like an adult loon dressed in winter garb until they are between one and two years old.

There are about 12,000 loons in Minnesota…more than in any other state except Alaska.

The Minnesota State quarter includes an image of a loon.

In winter, loons migrate to the Gulf of Mexico or the Atlantic coast.

Loons can live to be thirty years old.

Loons have solid bones; most other birds have hollow bones.

Lake Vermilion has one of the largest populations of loons in Minnesota.

You might see a loon on any Minnesota lake however your chances are greater on the larger, and farther north, lakes.

You Likely Know That the Minnesota State Bird Has a Distinctive Call.

Often, while camping by a lake, our kids would spend a great deal of time perfecting their “loon calls” in the hope of a response from a real loon.

Once in a while it would actually happen. What many people don’t know is that the Common Loon has four different calls.

Before the Legislature decided that the common loon should be Minnesota’s state bird, several other birds were suggested, including the Eastern goldfinch (1947).

The common loon is one of the earth’s oldest living bird species. Its name comes from a Norwegian word that means “wild, sad cry.” Approximately 12,000 make their homes in Minnesota.

Larger than a mallard but smaller than a goose, this water bird has a thick neck and a long, black bill. Its legs are set far back on its body, so it has an awkward gait on land. The male is slightly larger.

Characteristics of the Common Loon

There are nineteen official symbols of the US state of Minnesota, as designated by the Minnesota Legislature.[1] The first named symbol is the state’s motto, L’Étoile du Nord – French for “Star of the North”.

It was selected in 1861, shortly after Minnesota achieved statehood, by the first governor, Henry Sibley, as a reflection of Minnesota’s location in the Northern United States. That same year, the state seal was appointed.

Minnesota did not designate another official symbol until 1945, when “Hail! Minnesota”, then the official song of the University of Minnesota, was designated as state song.

In 1984, Minnesota became the first state to appoint a state mushroom, the common morel (Morchella esculenta).[1]