what was the name of meriwether lewis’s dog?

what was the name of meriwether lewis’s dog?

Hello dear friends, thank you for choosing us. In this post on the solsarin site, we will talk about “what was the name of meriwether lewis’s dog?”.
Stay with us.
Thank you for your choice.

Seaman, Meriwether Lewis’ dog, was the only animal to complete the entire trip. He was a Black Newfoundland. He was lost/stolen at one point during the trip but returned later.

Seaman was mentioned only occasionally in the journals. We have to imagine him riding in the boats or trotting along the shore and hunting with the men as they moved along on their journey, even though the men keeping journals did not tell us about his daily activities.

Capt. Lewis first mentioned his dog in his journal entry of September 11, 1803: “I made my dog take as many [squirrels] each day as I had occasion for. They were fat and I thought them when fried a pleasant food. Many of these squirrels were black. They swim very light on the water and make pretty good speed. My dog was of the Newfoundland breed, very active, strong and docile. He would take the squirrels in the water, kill them, and swimming bring them in his mouth to the boat.”

On November 16 Lewis mentioned the dog once more: “We found here some Shawnees and Delawares encamped, one of the Shawnees, a respectable-looking Indian, offered me three beaver skins for my dog, with which he appeared much pleased. The dog was of the Newfoundland breed, one that I prized much for his docility and qualifications generally for my journey and of course there was no bargain. I had given $20 for this dog myself.”

On July 5, 1804, Capt. Clark recorded in his journal that: “We came to for Dinner at a Beaver house. Capt. Lewis’s Dog Seaman went in & drove them out.”

Sgt. John Ordway wrote on April 26, 1805 that he “Saw a flock of goats [pronghorn antelopes] swimming the river this morning near to our camp. Capt. Lewis’s dog Seaman took after them, caught one in the river, drowned & killed it and swam to shore with it.”

Seaman continued to hunt in this manner until he was severely injured by a beaver in mid-May 1805. Clark wrote: “Capt. Lewis’s dog was badly bitten by a wounded beaver and was near bleeding to death.”

Seaman also served as a watchdog. On May 29, 1805, Lewis wrote that “Last night we were all alarmed by a large buffalo bull, which swam over from the opposite shore, and coming alongside of the White Pirogue, climbed over it to land. He then, alarmed, ran up the bank in full speed directly towards the fires, and was within 18 inches of the heads of some of the men who lay sleeping before the sentinel could alarm him or make him change his course. Still more alarmed, he now took his direction immediately towards our lodge, passing between 4 fires and within a few inches of the heads of one range of the men as they yet lay sleeping. When he came near the tent, my dog saved us by causing him to change his course a second time, which he did by turning a little to the right, and was quickly out of sight, leaving us by this time all in an uproar with our guns in our hands, inquiring of each other the cause of the alarm, which after a few moments was explained by the sentinel. We were happy to find no one hurt.”

June 19, 1805, Capt. Lewis wrote that: “After dark my dog barked very much and seemed extremely uneasy which was unusual with him; I ordered the Sergt. of the guard to reconnoiter with two men, thinking it possible that some Indians might be about to pay us a visit, or perhaps a white [grizzly] bear. He returned soon after & reported that he believed the dog had been baying at a buffalo bull which had attempted to swim the river just above our camp, but had been beaten down by the stream, landed a little below our camp on the same side & run off.”

And on June 27 he added: “A bear came within thirty yards of our camp last night and ate up about thirty weight of buffalo suet which was hanging on a pole. My dog seems to be in a constant state of alarm with these bear and keeps barking all night.”

Seaman was also quite a hunter. On July 15, 1805 Capt. Lewis mentioned that the hunter George Drouillard “wounded a deer which ran into the river. My dog pursued, caught it, drowned it and brought it to shore at our camp.” On July 27 Seaman caught some geese. 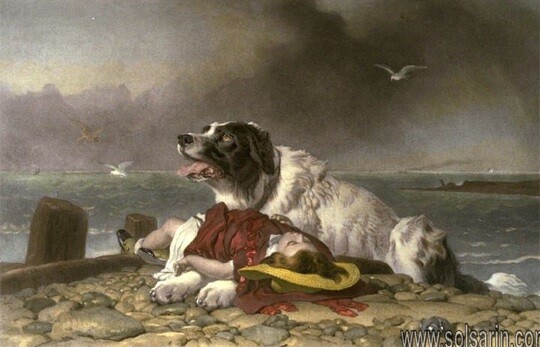 Seaman was bothered by cactus spines which became embedded in his paws. Lewis noted: “The highlands are thin, meager soil covered with dry low sedge and a species of grass, also dry, the seeds of which are armed with a long twisted hard beard at the upper extremity. . . These barbed seeds penetrate our moccasins and leather leggings and give us great pain until they are removed. My poor dog suffers with them excessively. He is constantly biting and scratching himself as if in a rack of pain. The prickly pear also grow here as abundantly as usual.”

Seaman even served as an ambassador

Seaman even served as an “ambassador” of sorts with Indian nations, like the Shoshone, who were completely unacquainted with Anglo-American culture. Lewis wrote on August 17, 1805 that “Every article about us appeared to excite astonishment in their minds; the appearance of the men, their arms, the canoes, our manner of working them, the black man York and the sagacity of my dog were equally objects of admiration.”

There were very few mentions of Seaman during the winter at Fort Clatsop; it would be interesting to know what he thought as the men purchased dogs to eat when they did not have other types of meat. Although Seaman was not mentioned in the journals after June 1806 recently discovered information seems to indicate that he survived the trip and returned to St. Louis with Lewis and Clark.

Loyal to the End?

ewfoundland dogs tend to become strongly loyal to their masters, a proclivity reinforcing the legend that Seaman pined away by Lewis’s graveside on the Natchez Trace. But if it’s true, how did those three Watlala Indians manage to entice Seaman away from his master (11 April 1806). Were they “dog-whisperers” in a class with the Plains warriors who lured away the Corps’ horses from time to time? Or was Seaman simply a sucker for a little human affection plus an edible morsel?

Lewis observed a curious crisis involving two quadrupeds and himself on 22 April 1805 when “a buffaloe calf . . . attatched itself to me and continued to follow close at my heels untill I embarked [in a canoe] and left it. it appeared allarmed at my dog which was probably the cause of it’s so readily attatching itself to me.”

Below, James Holmberg lays out the evidence that Seaman continued with Lewis after the expedition.

Seaman, a Newfoundland dog, became famous for being a member of the first American overland expedition from the Mississippi River to the Pacific coast and back. He was the only animal to complete the entire trip.[1] He was purchased for $20 in Pittsburgh, Pennsylvania by Captain Meriwether Lewis while he was in the city awaiting completion of the boats for the voyage in August 1803, for his famed Lewis and Clark expedition.

During the expedition, around May 14, 1805, Captains Meriwether Lewis and William Clark performed surgery on one of Seaman’s arteries in his hind leg that had been severed by a beaver bite.[1] Lewis and Clark’s Corps of Discovery ate over 200 dogs while traveling the Lewis and Clark Trail, but Seaman was spared.[2] 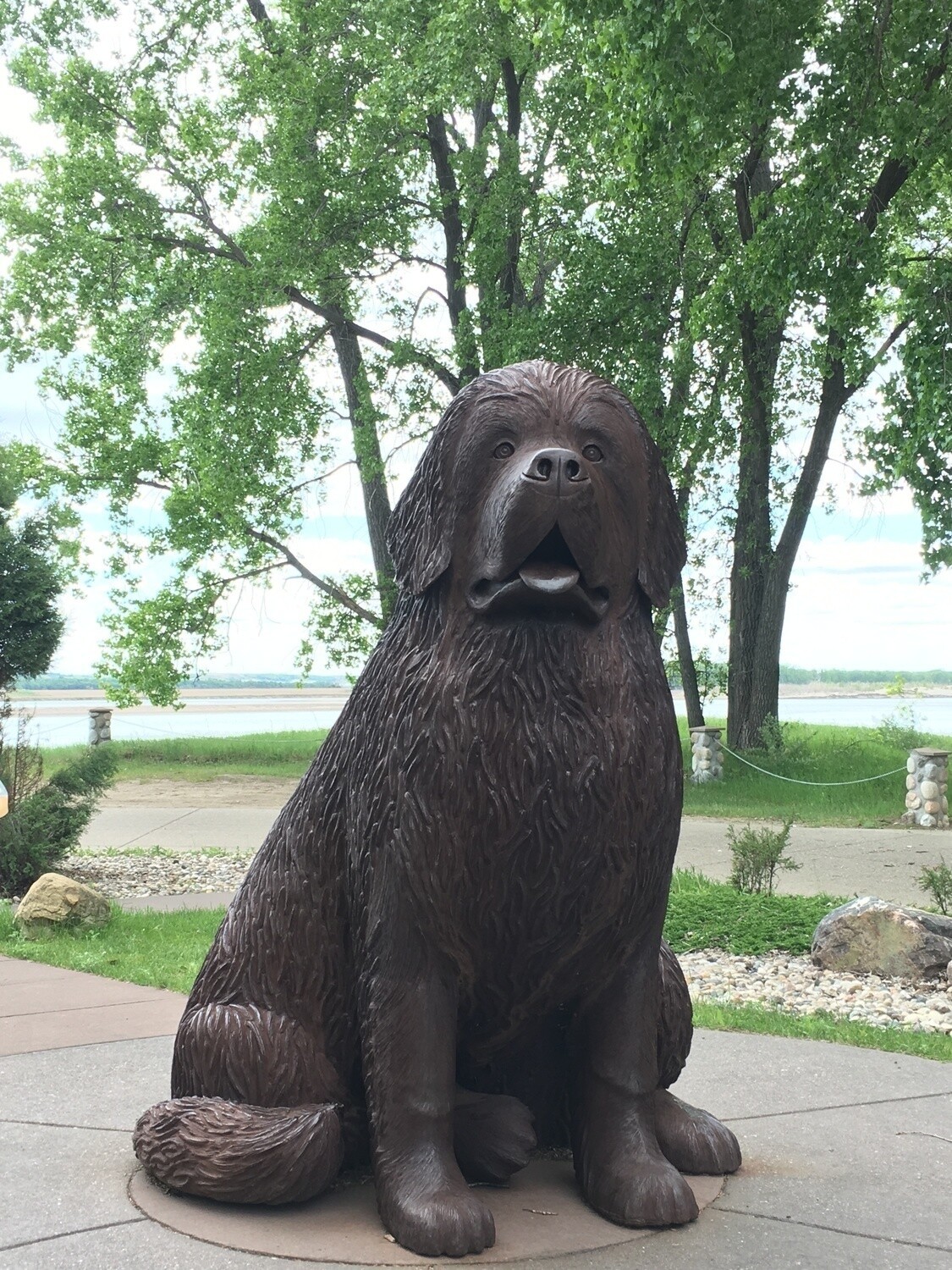