where did georgia o’keeffe go to college 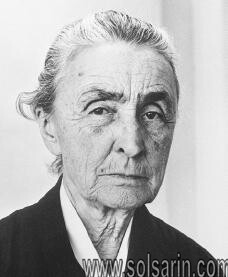 where did georgia o’keeffe go to college

Georgia O’Keeffe was born in Sun Prairie, Wisconsin, on November 15, 1887, to Francis and Ida O’Keeffe.
She had six siblings, and the family lived on a farm outside of Madison, Wisconsin.

Georgia attended the Sacred Heart Academy, and here she had a chance to learn about drawing and painting. She also attended Saturday art lessons.

Her family moved to Williamsburg, Virginia, and she attended Chatham Episcopal Institute. Here she excelled in the school’s art program.

She worked briefly as a commercial artist in Chicago, and in 1912 she became interested in the principles of Oriental design.

She began to use Dow’s system of art education, based on frequent themes in Oriental art, in her teacher-training courses at West Texas State Normal College
where she served as department head (1916–1918).

Career as an artist begins

In 1916 Alfred Stieglitz (1864–1946), the well-known New York photographer and supporter of modernism (a style of art that went against established norms)

exhibited some of O’Keeffe’s abstract (a type of art that does not strongly represent real objects) drawings. In 1924 O’Keeffe and Stieglitz were married.

Lake George, Coat and Red (1919), a chief example of O’Keeffe’s early abstract style
was a roughly brushed composition in which a twisted, mysterious form looms against a rainbow-colored sky.

Early in her career she developed a personal, extremely polished style, favoring abstract subject matter such as flower details and severe architectural themes.

Many of her paintings were dramatic, sharp-focus enlargements of botanical (flower or plant life) details.

further simplified in her painting, were America’s anonymous folk architecture; in these forms O’Keeffe found a peace that contrasted with the frantic city environment.

Her subjects were simple and basic. Even her stories of death in the desert—a sunbleached skull lying in the sand or attached to a post (as in Cow’s Skull with Red, 1936)—were preserved.

She regarded these whitened remains as symbols of the desert, nothing more.

The dried animal bones and wooden crucifixes of the region that appear in her desert ( Black Cross, New Mexico, 1929) were disturbing imaginings.

In 1945 O’Keeffe bought an old adobe house in New Mexico; she moved there after her husband’s death in 1946.

The house served as a frequent subject in paintings such as Black Patio Door (1955) and Patio with Cloud (1956).

Many of O’Keeffe’s paintings of the 1960s, large-scale patterns of clouds and landscapes seen from the air
reflected a romanticized view of nature reminiscent of her early themes.

These large paintings culminated in a twenty-four-foot mural on canvas, Sky above Clouds IV (1965). Her paintings of the 1970s were intense, powerful representations of a black rooster.

A portrayal of O’Keeffe, In Cahoots with Coyote from Terry Tempest Williams’s 1994 book An Unspoken Hunger
painted a vivid narrative of the artist’s intense interest in the beloved New Mexico she first visited in 1917.

Her search for the ideal color, light, stones, and parched bones, transformed her desert country excursions into a personal closeness she felt with the perfection around her.

Once, in a canyon bottom, she was so absorbed by the sight that she laid her head back Coyote-fashion and howled at the sky
terrifying her companions nearby who feared she was

Georgia O’Keeffe.
Reproduced by permission of the
Corbis Corporation

injured. “I can’t help it—it’s all so beautiful,” was her response.

The end of a brilliant career

O’Keeffe’s boldly original American works spanned a wide vision from taut city towers to desertscapes in such vivid hues and form “as to startle the senses,”
according to Williams’s narrative.

O’Keeffe painted until a few weeks before her death in Santa Fe, New Mexico, on March 6, 1986, at the age of ninety-eight.

Many of O’Keeffe’s works found a permanent home among the adobe buildings of Sante Fe.

The Georgia O’Keeffe Museum, designed by New York architect Richard Gluckman
opened in 1997 to hold more of her pastels, drawings, paintings, and sculptures than any other museum.

In her later years, O’Keeffe suffered from macular degeneration and began to lose her eyesight.

As a result of her failing vision, she painted her last unassisted oil painting in 1972, however, her urge to create didn’t falter.

With the help of assistants, she continued to make art and she wrote the bestselling book Georgia O’Keeffe (1976).
“I can see what I want to paint,” she said at the age of 90. “The thing that makes you want to create is still there.”

In 1977, President Gerald Ford presented O’Keeffe with the Medal of Freedom and, in 1985, she received the National Medal of Arts.

O’Keeffe died on March 6, 1986, in Santa Fe, New Mexico, and her ashes were scattered at Cerro Pedernal, which is depicted in several of her paintings.

The pioneering artist produced thousands of works over the course of her career, many of which are on exhibit at museums around the world.

The Georgia O’Keeffe Museum in Santa Fe, New Mexico is dedicated to preserving the life, art and legacy of the artist
and offers tours of her home and studio, which is a national historic landmark.

In the summer of 1929, O’Keeffe found a new direction for her art when she made her first visit to northern New Mexico.

The landscape, architecture and local Navajo culture inspired her, and she would return to New Mexico, which she called “the faraway,” in the summers to paint.

In the 1940s, O’Keeffe’s work was celebrated in retrospectives at the Art Institute of Chicago (1943) and at the Museum of Modern Art (1946), which was the museum’s first retrospective of a female artist’s work.

O’Keeffe split her time between New York, living with Stieglitz, and painting in New Mexico. She was particularly inspired by Ghost Ranch, north of Abiquiú, and she decided to move into a house there in 1940.

Back in New York, Stieglitz had begun to mentor Dorothy Norman, a young photographer who later helped manage his gallery, An American Place.

The close relationship between Stieglitz and Norman eventually developed into an affair.

In his later years, Stieglitz’s health deteriorated and he suffered a fatal stroke on July 13, 1946, at the age of 82.

O’Keeffe was with him when he died and was the executor of his estate.

Three years after Stieglitz’s death, O’Keeffe moved to New Mexico in 1949, the same year she was elected to the National Institute of Arts and Letters.

In the 1950s and 1960s, O’Keeffe spent much of her time traveling the world, finding new inspirations from the places she visited.
Among her new work was a series depicting aerial views of clouds as is seen in Sky above Clouds, IV (1965).

In 1970, a retrospective of her work at the Whitney Museum of American Art in New York City renewed her popularity, especially among members of the feminist art movement.