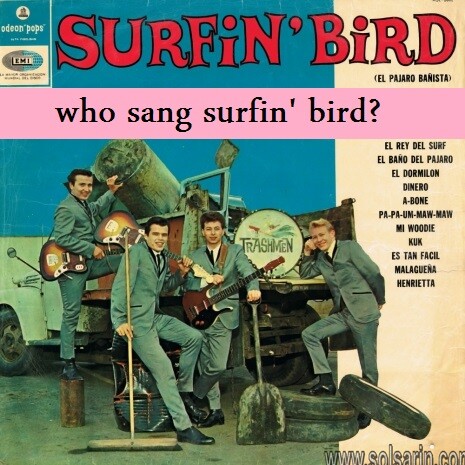 Hello dear friends, thank you for choosing us. In this post on the solsarin site, we will talk about “who sang surfin’ bird?”.
Stay with us.
Thank you for your choice.

The story of “Surfin’ Bird,” the most influential novelty song ever (and Peter Griffin’s favourite song)

If you’re not quite old enough, you might have been confused by this episode of Family Guy. Was this for real?

Tedium.com has the story of the most influential novelty song of all time.

It all began with a garage band from Minnesota called The Trashmen, whom—contrary to some accounts—were not Trash men themselves. The name was based on a song they wrote as teens called “Trashmen Blues.”The band started playing both songs at local shows. The band heard “Papa-oom-mow-mow” and “Bird’s the Word” performed by a Wisconsin cover band one night and decided to incorporate the tunes into their own set.

The band’s drummer and singer, Steve Wahrer, decided to experiment with combining the two songs during a gig and “Surfin’ Bird” was the result. The band then recorded the song, which became popular on local radio, eventually hitting the national charts. The band recorded a 12-song album named after their famous song.

The album is mostly instrumental, fun and readily available on streaming services and online. It’s worth every reverb-soaked minute of surf music good.

“Surfin’ Bird” is a song performed by the American surf rock band The Trashmen, and it is also the name of the album that featured this hit single. It was released in 1963 and reached No. 4 on the Billboard Hot 100.[1] It is a combination of two R&B hits by The Rivingtons: “Papa-Oom-Mow-Mow” and “The Bird’s the Word”,[2] which was influenced by Red Prysock’s “What’s the word? Thunderbird!”[3]

It is widely rumored, but highly unlikely, that Surfin’ Bird was derived from a radio ad jingle advertising Thunderbird as a brand of cheap wine: “What’s the word? Thunderbird. How’s it sold? Good and cold. What’s the jive?

Thirty twice.”[4] The jazz release that reflects common misconception of the wine jingle and is titled, “What’s The Word? Thunderbird!” was issued in record form as Mercury 71214 in October 1957.[5] This release was written by Wilbur Prysock, and performed by Red Prysock.

The Rivingtons followed up their 1962 Billboard Hot 100 hit “Papa-Oom-Mow-Mow” with the similar “The Bird’s the Word” in 1963. The Trashmen had not heard this version but saw a band called The Sorensen Brothers playing it.[2] They decided to play the song that night at their own gig.

During this first performance, drummer and vocalist Steve Wahrer stopped playing and ad-libbed the “Surfin’ Bird” middle section.[2] Despite not knowing “The Bird’s the Word” was a Rivingtons song, the similarity to “Papa-Oom-Mow-Mow” was obvious and The Trashmen added the chorus to the end of their new track.

A local disc jockey, Bill Diehl, was at the gig and convinced the band to record the track.

[2] It was recorded at Kay Bank Studios in Minneapolis. Diehl entered it into a local battle of the bands competition and it won. It was then sent to a battle of the bands competition in Chicago where it also won.[2] This led to the group being signed to Garrett Records with the single being quickly released. It reportedly sold 30,000 copies in its first weekend[2] before going on to national success, reaching #4 on the Billboard Hot 100. Wahrer was originally credited as the song’s writer, but that was changed to the Rivingtons (Al Frazier, Carl White, Sonny Harris, and Turner Wilson Jr.) .

after the group successfully sued The Trashmen for plagiarism. There is apparently no truth to the urban legend which circulated in the late 1960s that the song had been written by Leonard Bernstein to show his disdain for rock’n’roll by proving that any song could become a hit.

“Surfin’ Bird” is performed by the surf rock band The Trashmen. Released in the fall of 1963, the song reached No. 4 on the Billboard Hot 100 in January 1964. The song – a combination of two earlier songs by rhythm and blues group The Rivingtons, “Papa-Oom-Mow-Mow” and “The Bird’s the Word” – became The Trashmen’s only top 10 hit.

On Family Guy, “Surfin’ Bird” is featured in the first act of the episode “I Dream of Jesus”. The song is played on a jukebox while the Griffins are visiting the Nifty Fifties Diner; Peter reveals that “Surfin’ Bird” was his favorite song from his childhood and begins dancing. When the manager of the diner begins to discard the 45 RPM copy of song for failing to fit into the diner’s 1950s theme, Peter takes the record home and proceeds to drive everyone crazy by playing the song non-stop, dancing to the song and making it a part of every conversation he has.

After Peter spends most of his family’s savings

After Peter spends most of his family’s savings on producing an insipid commercial built around the song, Brian and Stewie try to cure Peter of his latest obsession by taking and then destroying the record. By the end of the episode, Peter gets a new copy of the song, which plays during the closing credits.

Peter sings it again while having amnesia thinking it is a new song in “Big Man on Hippocampus”.

Peter also sings it to get out of jury duty in “April in Quahog”.

Surfin’ Bird is the debut and only album by the Trashmen, released on 14 January 1964. It was named after their novelty hit of the same name. The album peaked at no 48 at the Billboard 200 chart.[3]

The album was recorded at Kay Bank Studio and rushed to the stores to capitalize on the success of the “Surfin’ Bird” single, released two months earlier.[2] According to Rick Shefchik’s book Everybody’s Heard about the Bird, which chronicles the band’s rise and fall, both the Surfin’ Bird album and the single each went on to sell over a million copies.