why was the sarcophagus important 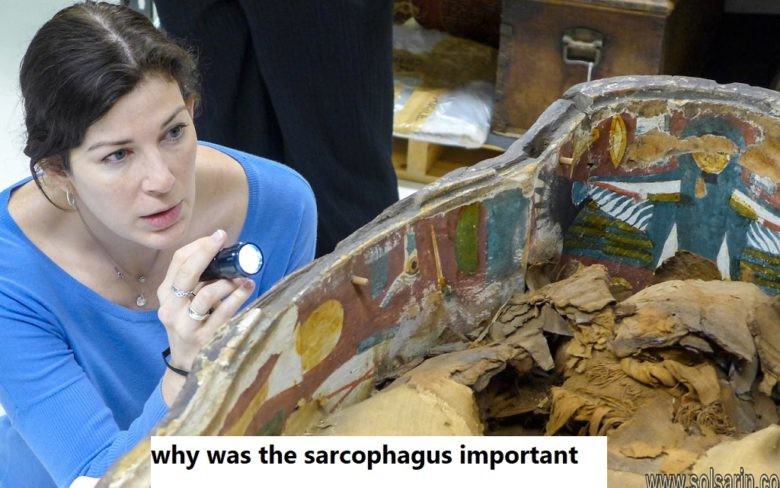 why was the sarcophagus important

Welcome to  solsarin site  ,Keep reading and find the answer of  “why was the sarcophagus important ”.
Stay with us.
Thank you for your support.

The Development of the Egyptian Coffin (sarcophagus)

A central priority of ancient Egyptian religion was the protection of the body after death. A preserved body was one of the elements necessary for transforming the deceased into an effective spirit, an akh, who would live on in the afterlife. As part of this need for protection, the Egyptians who could afford to do so would ensure that their mummified remains were placed in a coffin. Although they were expensive, coffins were considered a key component of the burial assemblage and are found in tombs from the Predynastic period to the Greco-Roman era and beyond.

In addition to protection, the coffin had several religious and symbolic functions that changed over time. and In its earliest history, the coffin was considered the eternal dwelling of the deceased. In the Old Kingdom, rectangular coffins were often constructed to mimic the recessed niches associated with elaborate, walled dwellings. This shape reflected the belief that the deceased dwelled in the tomb and received offerings from surviving family members. These early coffins were usually undecorated, but in the later Old Kingdom, they were inscribed with simple offering formulas. A pair of wadjet eyes and eventually an image of a “false door” painted on the exterior provided additional, magical assistance for leaving the coffin and the tomb to receive offerings.
At the end of the Old Kingdom, non-royal individuals gained access to the funerary texts previously reserved for the interiors of royal pyramids. These private variations, referred to as Coffin Texts, are found written mostly on the interior of coffins from the First Intermediate Period and the Middle Kingdom. These spells ensured that the deceased would reach the afterlife and continue to prosper there. The nature of the afterlife also changed, as the dead were considered to be a manifestation of the god of the dead, Osiris. These decorated rectangular coffins were popular until the end of the Middle Kingdom, when they began to be replaced with carved, anthropoid (human-shaped) coffins.
The anthropoid shape decorated with a large pair of wings was used for royal and non-royal coffins during the Second Intermediate Period. This style, referred to as rishi after the Arabic word for feather, may have been associated with the winged goddesses Isis and Nephthys, who were known to assist Osiris in his myth of rebirth. Such coffins also were dressed with a headdress, collar and often a false-beard that reflected an Osiride image of the owner. Royal coffins incorporated a variation of this decoration to the Third Intermediate Period, as seen, for example, in the gold and inlaid coffins of Tutankhamun and those of Pasebakhaenniut, better known as Psusennes I.
Private coffins followed their own trajectory of development during the New Kingdom. Already in the 18th dynasty, alongside the rishi style, private coffin decoration combined the anthropoid, Osiride shape and features with bands of offering formulas and texts popular in the Middle Kingdom. The early examples maintained the Osiride face, collar and wig, but the body of the coffin was painted white, and bands, often with texts, crossed over the lid and continued on the coffin case. These bands represented mummy bandages, again associated with the mummified god of the dead.
In the later 18th dynasty, the white background was replaced with black. This was likely intended to align with Osiride elements of fertility and rebirth. In the Ramesside Period, the Osiride, anthropoid features remained, but solar elements of religion seem to be integrated through the transition to a yellow background. The texts, now often including spells from the Book of the Dead, were frequently accompanied by vignettes and crowded images of gods and protective symbols.
These yellow coffins remained in use until the beginning of the Third Intermediate Period, after which they went through a succession of changes in response to an era of economic distress. The decoration became more simplified, while cartonnage, a method of construction similar to papier maché, was frequently used for the internal mummy covering. In the 25th dynasty, the “weighing of the heart” and the “embalming of Osiris” became popular decorative themes, and in the Late Period, a coffin made out of wood or stone, depicting an over-large smiling face, was the style of choice. Finally, in the Greco-Roman period, coffins were transformed through the adoption of more Hellenic features, signifying a major shift in the tradition of coffin construction and decoration.
Due to the long history of coffins as part of both royal and private funerary assemblages, their development sheds light on many social and religious shifts. Coffin studies traditionally have been focused on the changes visible in texts and decorative motifs. However, scholars are beginning to recognize the significance of transformations in material and construction over time. This scholarship enriches the basic understanding of the coffin, which, as a material object, can provide evidence for social shifts in trade, international relations and economics. For example, UCLA Egyptologist Kara Cooney has worked in association with ARCE to investigate the extent and types of coffin reuse in the Ramesside and Third Intermediate Periods. Cooney’s work has helped to demonstrate the long, layered history of these potent, magical and socially significant objects, and to clarify the social and economic distress felt by Egyptians during this tumultuous era.

What was the purpose of the sarcophagus?

The main purpose of these containers was the protection of the corpse from scavenging animals and tomb robbers. They also served an important religious role through their shape and decoration, which changed and developed over the whole of ancient Egyptian history.

Why were things placed in the tomb with the coffin?

Pharaohs were mummified with amulets and jewels inside the linen wrappings and then buried in lots of coffins inside coffins to protect the body. The heart was left inside the body, because Egyptians believed it would be weighed in the afterlife to see if you had led a good life.

What is a sarcophagus chamber?

A sarcophagus (plural sarcophagi or sarcophaguses) is a box-like funeral receptacle for a corpse, most commonly carved in stone, and usually displayed above ground, though it may also be buried.

Why was the sarcophagus important to the ancient Egyptians?

The sarcophagus was an important part of an elaborate burial process. Ancient Egyptians believed that they would live on in an afterlife. They prepared a dead person for this afterlife by embalming the body and wrapping it in linens, a process known as mummification.

Is there a sarcophagus in the Great Pyramid of Khufu?

A granite sarcophagus lies in the chamber, but it is not known if there ever was a corpse put to rest there; a mummy or grave goods haven’t been found inside the pyramid. The King’s Chamber (crypt) of Khufu’s pyramid with its five relieving chambers built with huge granite stone blocks.

What was in the bottom of the sarcophagus?

When the coffins were removed, Carter reported that the double case was found lying in the bottom of the sarcophagus. This container still held remnants of the embalming unguents. These perfumed oils, poured over the body during the burial, had hardened with age and now glued the two inner coffins and the mummy together.

What was in the sarcophagus of King Tutankhamun?

The sarcophagus of King Tutankhamun in its burial chamber after the mummy was placed in a glass urn designed to protect the remains from humidity and other contamination. Photograph: Cris Bouroncle/AFP/Getty Images A dagger entombed with King Tutankhamun was made with iron from a meteorite, a new analysis on the metal composition shows.