why was this dinosaur called “triceratops”? 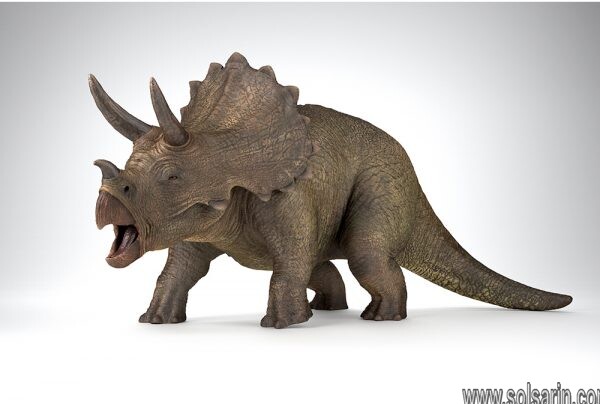 why was this dinosaur called “triceratops”?

Have you ever thought about this question “why was this dinosaur called “triceratops”?” Today on Solsarin we’re going to answer this question.

Triceratops is an extinct genus of herbivorous chasmosaurine ceratopsid dinosaur
that first appeared during the late Maastrichtian stage of the Late Cretaceous period about 68 million years ago in what is now North America.
It is one of the last-known non-avian dinosaur genera, and became extinct in the Cretaceous–Paleogene extinction event 66 million years ago.
The name Triceratops, which literally means ‘three-horned face’, is derived from the Greek words trí- (τρί-) meaning ‘three’, kéras (κέρας) meaning ‘horn’, and ṓps (ὤψ) meaning ‘face’.

Bearing a large bony frill, three horns on the skull, and a large four-legged body, exhibiting convergent evolution with rhinoceroses and bovines
Triceratops is one of the most recognizable of all dinosaurs and the most well-known ceratopsid.
It was also one of the largest, up to 9 meters (30 ft) long and 12 metric tons (13 short tons) in weight.

It shared the landscape with and was possibly preyed upon by Tyrannosaurus
though it is less certain that two adults did battle in the fanciful manner often depicted in museum displays and popular images.
The functions of the frills and three distinctive facial horns on its head have long inspired debate.
Traditionally, these have been viewed as defensive weapons against predators.
More recent interpretations find it probable that these features were primarily used in species identification, courtship
and dominance display, much like the antlers and horns of modern ungulates.

Triceratops was traditionally placed within the “short-frilled” ceratopsids
but modern cladistic studies show it to be a member of the Chasmosaurinae which usually have long frills.
Two species, T. horridus and T. prorsus, are considered valid today, from the seventeen species that have ever been named.
Research published in 2010 concluded that the contemporaneous Torosaurus, a ceratopsid long regarded as a separate genus, represents Triceratops in its mature form.
This view has been disputed; further data is needed to settle the debate.

Triceratops has been documented by numerous remains collected since the genus was first described in 1889 by American paleontologist Othniel Charles Marsh.
Specimens representing life stages from hatchling to adult have been found.
As the archetypal ceratopsid, Triceratops is one of the most popular dinosaurs, and has been featured in film, postal stamps, and many other types of media.

The first named fossil specimen now attributed to Triceratops is a pair of brow horns attached to a skull roof, found by George Lyman Cannon near Denver, Colorado, in the spring of 1887.
This specimen was sent to Marsh, who believed that the formation from which it came dated from the Pliocene
and that the bones belonged to a particularly large and unusual bison, which he named Bison alticornis.
He realized that there were horned dinosaurs by the next year, which saw his publication of the genus Ceratops from fragmentary remains, but he still believed B.
alticornis to be a Pliocene mammal. It took a third and much more complete skull to change his mind.

The Triceratops holotype (YPM 1820) was collected in 1888 from the Lance Formation of Wyoming, USA, by fossil hunter John Bell Hatcher
yet Marsh initially described this specimen as another species of Ceratops.
Cowboy Edmund B. Wilson had been startled by the sight of a monstrous skull poking out of the side of a ravine.
He tried to recover it by throwing a lasso around one of the horns.
When it broke off, the skull tumbling to the bottom of the cleft, Wilson brought the horn to his boss
the rancher and avid fossil collector Charles Arthur Guernsey, who happened to show it to Hatcher.
Marsh subsequently ordered Hatcher to locate and salvage the skull.

The holotype was first named Ceratops horridus. When further preparation uncovered the third nose horn
Marsh changed his mind and gave the piece the generic name Triceratops (lit. ’three horn face’)
accepting his Bison alticornis as another species of Ceratops. (It would later be added to Triceratops.)
The sturdy nature of the animal’s skull has ensured that many examples have been preserved as fossils
allowing variations between species and individuals to be studied.
Triceratops remains have subsequently been found in the American states of Montana and South Dakota (and more in Colorado and Wyoming)
as well as the Canadian provinces of Saskatchewan and Alberta.

An earlier specimen, also recovered from the Lance Formation, was named Agathaumas sylvestris by Edward Drinker Cope in 1872.
Originally identified as a hadrosaur, this specimen consists only of post-cranial remains and is only provisionally considered an example of Triceratops.

After Triceratops was described, between 1889 and 1891 Hatcher with great effort collected another thirty-one of its skulls.
The first species had been named T. horridus by Marsh. Its specific name was derived from the Latin horridus (‘rough, rugose’)

perhaps referring to the type specimen’s rough texture, later identified as an aged individual.
The additional skulls varied to a lesser or greater degree from the original holotype.
This variation is unsurprising, given that Triceratops skulls are large three-dimensional objects, coming from individuals of different ages and both sexes
and which were subjected to different amounts and directions of pressure during fossilization.

In the first attempt to understand the many species, Richard Swann Lull found two groups, although he did not say how he distinguished them: One composed of T. horridus, T. prorsus, and T. brevicornus (‘the short-horned’); the other of T. elatus and T. calicornis.

Two species (T. serratus and T. flabellatus) stood apart from these groups.
By 1933 and his revision of the landmark 1907 Hatcher–Marsh–Lull monograph of all known ceratopsians
he retained his two groups and two unaffiliated species, with a third lineage of T. obtusus and T. hatcheri (‘Hatcher’s’)
that was characterized by a very small nasal horn.
T. horridus–T. prorsus–T. brevicornus was now thought to be the most conservative lineage, with an increase in skull size and a decrease in nasal horn size
and T. elatus–T. calicornis was defined by large brow horns and small nasal horn. C. M. Sternberg made one modification
adding T. eurycephalus (‘the wide-headed’) and suggesting that it linked the second and third lineages closer together than they were to the T. horridus lineage.

With time, the idea that the differing skulls might be representative of individual variation within one (or two) species gained popularity.
In 1986, John Ostrom and Peter Wellnhofer published a paper in which they proposed that there was only one species
Triceratops horridus. Part of their rationale was that generally there are only one or two species of any large animal in a region.
To their findings, Thomas Lehman added the old Lull–Sternberg lineages combined with maturity and sexual dimorphism
suggesting that the T. horridus–T. prorsus–T. brevicornus lineage was composed of females, the T. calicornis–T. elatus lineage was made up of males
and the T. obtusus–T. hatcheri lineage was of pathologic old males.

Skull and other skeletal features

Triceratops possessed a gigantic skull, and some individuals had skulls nearly 3 metres (about 10 feet) long
which would place them among the largest of all terrestrial animals.
In addition to its three conspicuous horns, which were placed above each eye and on the snout
it possessed numerous small spikes (epoccipitals) that bordered the margin of the expanded frill of bone at the back of the skull.
There were as many as 19–26 epoccipitals on the frill.

Triceratops also possessed smaller hornlike projections on the jugal bones (cheekbones).
The upper and lower jaws were lined with stacked columns of teeth, which appear to have been specialized for shearing.
The front of the mouth formed a beak, which may have been used to crop vegetation.
In addition, most of the skull was covered by indentations made by blood vessels; similar indentations are found under the keratinous beaks of living birds.
This suggests that the dinosaur’s entire head, aside from the cheeks and the area around the nostrils, was covered in keratin while it was alive.
In many living birds, keratin is very colourful, a fact that suggests that the skulls of Triceratops may have been very colourful as well.

The skull is known to have undergone dramatic changes in shape throughout the development of Triceratops from an embryo to an adult.
The smallest Triceratops skulls have small straight horns above their eyes.
Slightly larger juvenile specimens have backward-curving horns above the eyes
and triangular epoccipitals bordering the large frill at the back of the skull.
As juveniles matured into adults, their horns curved forward and the epoccipitals bordering the frill became flattened.

Comparisons of the horns and frills of the two genera suggest that they may in fact represent different life stages of the same species
with Torosaurus being the more mature of the two: as Triceratops matured, the frill expanded and thinned
eventually forming the two openings found in Torosaurus.
(This hypothesis, however, is a matter of some debate among members of the paleontology community.)

Similarly, the ceratopsid dinosaur Nedoceratops, which is known from a single specimen, possessed a small opening in its frill that suggests that it could be an intermediate growth stage between Triceratops and Torosaurus. Alternatively, it may represent a distinct genus of horned dinosaur or a Triceratops with an unusual cranial morphology. Covered by keratin or skin, the openings in the frill were not visible during life.