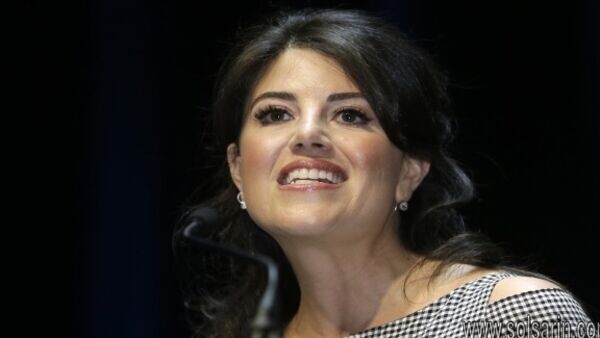 The Clinton Affair: Monica Lewinsky has a new perspective 20 years on

Twenty years since the White House was rocked by a sex scandal
it is being seen through new #MeToo eyes as ‘The Clinton Affair’, writes TP O’Mahony.

The question caught her off-guard, though she knew she should have been ready for it.

It was early 2001, and Monica Lewinsky was sitting on the stage of New York’s Cooper Union in the middle of taping a Q&A for a HBO documentary of which she was the subject.

“How does it feel to be America’s premier blow-job queen?”

Writing about it in the April 2014 edition of Vanity Fair (the article was entitled ‘Shame and Survival’), Lewinsky described her response.

“Hundreds of people in the audience, mostly students, were staring at me, many with their mouths agape
wondering if I would dare to answer this question.”

As she looked at the audience, from which there had been audible gasps, she saw numerous blurred, faceless people calling out: Don’t answer it!

“It’s hurtful and insulting,” she replied, attempting to gather her wits.

“And as insulting as it is to me, it’s even more insulting to my family.

“I don’t know why this whole story became about oral sex… The fact that it did may be the result of a male-dominated society.”

But why agree to the interview in the first place?

“You could argue that in agreeing to participate in a HBO documentary called Monica in Black
and White I had signed up to be shamed and publicly humiliated yet again.

“You might even think I had been inured to humiliation.

“This encounter at Cooper Union, after all, paled in comparison with the 445-page Starr Report
which was the culmination of independent counsel Kenneth Starr’s four-year investigation of the Clinton White House.

It included chapter and verse about my intimate sexual activities
along with transcripts of audiotapes that chronicled many of the private conversations.

“But the ‘BJ Queen’ question — which was included in the show when it aired on HBO in 2002 —
sat with me for a long time after the audience left and the taping wrapped.”

She said the main reason she had agreed to participate in the programme was not to “rehash or revise the storyline of Interngate”
but to try to shift the focus to meaningful issues.

“Many troubling political and judicial questions had been brought to light by the investigation and impeachment of President Bill Clinton.
But the most egregious had been generally ignored.

“People seemed indifferent to the deeper matters at hand, such as the erosion of private life in the public sphere
the balance of power and gender inequality in politics and media
and the erosion of legal protections to ensure that neither a parent nor a child should ever have to testify against each other.”

Lewinsky admitted she had been naive to expect the HBO documentary to explore these issues.

In the new six-part documentary called The Clinton Affair — which began airing last week in America to coincide
with the 20th anniversary of the publication of the Starr Report — Lewinsky describes how she
and Clinton tried unsuccessfully to keep their relationship — a consensual arrangement, she has always insisted (up until recently) — private.

“We were both cautious, but not cautious enough,” she said in a clip aired on Good Morning America.

She recounted how Clinton warned her she could face questioning as part of a sexual harassment lawsuit brought by another woman, Paula Jones.

They both decided to lie about their affair, Clinton doing so under oath.

It was this that would provide grounds later on for his impeachment.

After the publication of the Starr Report in 1998, Monica said she was “arguably the most humiliated person in the world”.

At the time both the Washington Post and the New York Times carried lengthy supplements with the full text, but her global humiliation was really driven by the internet.

In an attempt to escape, she moved to London and undertook a course of studies at the London School of Economics.

“My professors and fellow students at the LSE were wonderful — welcoming and respectful.

“I had more anonymity in London, perhaps due to the fact that I spent most of my waking hours in class or buried in the library.”

In 2006, she graduated with a master’s in social psychology.

Prior to her sojourn in London, however, she had agreed to co-operate with Andrew Morton, the author of Diana: Her True Story
which had become a worldwide bestseller.

Lewinsky had never read that book, but her New York attorney, Richard Hofstetter
had and it was he who set up the meeting that was to lead, in 1999, to the publication of a new book entitled Monica’s Story.

Morton recalled his first meeting with Lewinsky, describing her as:
“a demure, polite young woman who was a far cry from the brassy Beverly Hills babe of media mythology”.

The Lewinsky, he discovered, was “a bright, lively, and witty young woman who
while she bears the scars of her continuing public shaming, remains undefeated.

“She is a well-educated girl who likes singing, shopping, and poetry — TS Eliot is her favourite poet”.

The public shaming was the result of the Starr Report
a document later savagely criticised by the legal scholar Alan Dershowitz in his book Sexual McCarthyism for turning
“a tawdry series of Oval Office encounters” into a constitutional crisis.

“The Starr Report chronicled in graphic detail not just the blue dress but the (unnecessary) specifics of Monica’s sexual encounters
from the infamous cigar to ‘oral-anal contact’ to Monica’s orgasms.

“It was released as a bound volume and is available, to this day, as an audiobook voiced by two soap opera alumni,”
wrote the commentator Megan Carpentier in a long article in the Guardian in May 2014.

“It was used in an effort not to expose deep-seated corruption, indefensible criminal acts
or government involvement in war, death, or spying on its own citizens —
but rather in an ultimately unsuccessful endeavour to impeach a sitting president over whether he had lied under oath about the affair itself.

“It cost taxpayers an estimated $70m.

It cost Monica something much more immeasurable:
her dignity, her privacy, her ongoing ability to be unrecognised in public for sex she had 17 years ago (and counting)
and a lot of her ability to trust people.

Lewinsky was later to recognise that for Kenneth Starr and his investigators she was just a pawn used to get the president.

When told that the new mini-series was to be called The Clinton Affair, Monica Lewinsky was immediately pleased.

Hitherto all references to the Clinton-Lewinsky relationship have called it the ‘Monica Lewinsky Scandal’
even Cassell’s Dictionary of Modern American History has it listed under ‘The Lewinsky Scandal’.

The key to FX’s American Crime Story anthology series — which has tackled the murder trial of O.J. Simpson
and the killing of Gianni Versace in previous iterations — is showing new, telling revelations in a story the audience already thinks it knows well.
Impeachment scores on this count, mostly by focusing on the three women whose stories were most distorted by the media and politicians at the time: Jones, Tripp and Lewinsky.

There are other, juicy tidbits here. Billy Eichner is pitch perfect as Matt Drudge, the webmaster whose leaking of a Lewinsky story Newsweek delayed publishing ushered in the world of cultivating digital gossip for pageviews. And Cobie Smulders is scarily arch as Ann Coulter, the conservative activist pushing to turn the president’s affair into an impeachment that could drive a liberal leader from office.

Another performance I really enjoyed was Owen’s turn as Clinton. Outfitted with a large, prosthetic nose — a surprising number of characters here have them — and lilting drawl, he plays the scandal-plagued president in a more reflective, subdued way. This choice makes his Clinton seem less like a parody and more like an actual person. (More surprising is the near-invisibility of Edie Falco’s Hillary Clinton in early episodes; she doesn’t get a major scene until the season’s seventh episode.)

What was the Bill Clinton and Monica Lewinsky scandal?

Back in the summer of 1995, a 21-year-old Monica Lewinsky obtained a position as a White House intern through a family friend and relocated to Washington DC. Within a few months, she embarked on an affair with then-President Bill Clinton, who was very much married to Hillary Rodham Clinton. The Clintons share a daughter, Chelsea, too.

A year on, Lewinsky confided about her relationship with Clinton to a co-worker, Linda Tripp, who – twelve months on from that, in the autumn of 1997 – secretly recorded the confessional telephone calls.