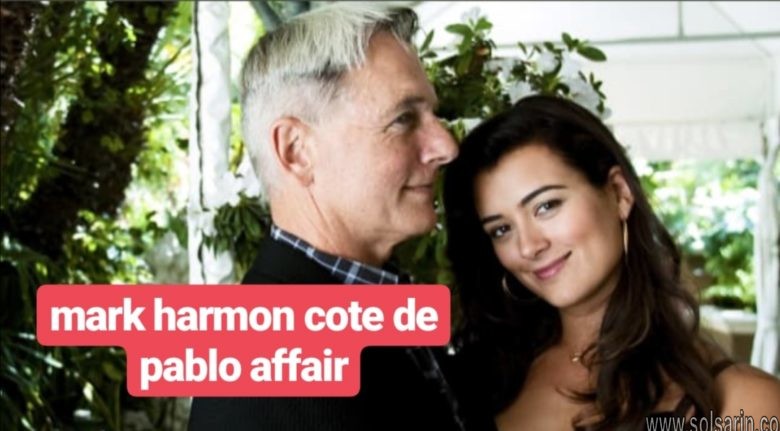 When you work together for over a decade, you’re bound to form some special connections. This is true for former NCIS star Cote de Pablo. The actress formed a special connection with co-stars Mark Harmon, who plays Jethro Gibbs, and Michael Weatherly, who played Tony Dinozzo.

Pablo left the series primarily in season 10 but did make a shocking return for a few episodes in seasons 16 and 17.

“[Mark Harmon] is more of a friend mentor. He was always like a father figure to me. Obviously, Ziva and Gibbs have that but Cote and Mark have that as well,” she said in an interview with BUILD. However, Cote and Mark don’t necessarily stay in touch all the time.

“He’s a very busy, famous man. Obviously, there are many months where you just don’t talk, but it’s really nice to know that sometimes when you have friendships but certainly in family – that’s a given- you can go time without talking but you’ve laid a foundation. A foundation that is solid,” she said. Harmon certainly is busy. He also is an executive producer of NCIS.

“From that foundation, you can really go anywhere,” Cote de Pablo explained. “You can go years without talking. Really heavy-duty things can happen, and then all the sudden you’re back and you can pick up right where you left off.” It seems that that’s exactly what happened with her and Mark Harmon when she returned to set.

“I have that with a lot of people I’ve worked with,” she said. “Certainly with Mark, certainly with Michael. They’re relationships that are very, very special. For many reasons. They’re forged in the heat of pressure. At times you’re having really great days and at times you’re having really challenging days.”
Cote de Pablo Reunited With Harmon in a Secret Meeting Before Season 16 Finale

In the season 16 finale of NCIS, Cote De Pablo returned, shocking audiences. But before she even returned to the set she had a secret meeting with Mark Harmon, where they reunited after years apart. During a classified meeting with executive producers, Mark Harmon surprised her.

“I just gave him a big hug and he just went Cotes,” she continued. “It was just like like right in the chest you know and just a hug and very heartfelt.”

Nicknames can sometimes show how close two people have become. This is definitely the case for de Pablo and Harmon. Their years of working closely together have resulted in some adorable nicknames. During an interview with the BUILD Series, de Pablo mentioned she has many nicknames for Harmon. “I have many nicknames for him. I have Mark, Marcos, Dorko, Dorky. I mean I have so many different names,” she said.

Harmon also has cute nicknames for de Pablo. One of his nicknames for her is “goat.” During an Entertainment Tonight interview, Harmon said he likes to have fun on the set. De Pablo said she doesn’t mind answering to the unusual nickname her co-star gave her. Cote explains, “He calls me goat. Don’t ask me why,” she joked.

The 39-year-old actress makes her triumphant return to NCIS for the show’s 17th season, six years after exiting the CBS drama. In an interview with BUILD Series, she admitted she was “nervous” reuniting with the cast and crew again after so many years.

“I’m actually really excited,” she said of reprising her beloved role of Ziva David. “At the beginning, of course, I was jittery and I was a little nervous, my first scene.”

De Pablo’s return was set up in the very last scene of Season 16. “Even though the scene was only with Mark [Harmon] there was that, like, it’s the scene,” she recalled. “It was like a top-secret operation my God, these guys were like no joke. They were calling every second…”

The actress had to use a “secret back entrance” at the studio in order to keep her appearance hush-hush.

“Five minutes before the car pulled up the executive producer called and said, ‘Duck! People may see you!’ There was no one there, it was 12 midnight,” she quipped.

Naturally, everyone on set was ecstatic to see her.

“Of course people from the production office were waiting, some of them had flowers, ‘Welcome back,'” she recounted. “I was like, ‘Not now guys, not now I have to go act!'”

“He’s a friend mentor, you know? He was always like a father figure to me and obviously Ziva and Gibbs have that, but Cote and Mark have a little of that,” she said. Although the two weren’t in constant contact during her time away from the show, they very much stayed connected.

“He’s a very busy, famous man and so obviously there are many months where you just don’t talk, but it’s really nice to know that — sometimes when you have friendships… you can go time without talking, but you’ve laid a foundation, a foundation that is solid,” she explained. “You pick up where you left off. I have that… certainly with Mark, certainly with Michael [Weatherly].”

“We went through something incredible, which were years of working closely together,” she added of Harmon. “Like

I said, we were forged in fire… it’s intense.”

Cote was born in Santiago, Chile, on November 12, 1979. When she was only ten years old, her family moved to Miami, Florida. Once there, the young celebrity started focusing her studies in the entertainment industry, including music and theater. Her first role on a TV show came in 2000 when she got a small part on the TV show “The $treet.” After that, she kept lading minor roles on different projects such as “The Education of Max Bickford” and “The Jury.”

Cote de Pablo got her big break, however, in 2005, when she started portraying Ziva David on “NCIS.” In the show, she worked next to Mark Harmon, Michael Weatherly, Pauley Perrette, and many more renowned actors. Unfortunately, she left the series in 2013, leaving a myriad of fans with broken hearts and asking producers, directors, and everybody involved in the project to bring her back.

Thankfully, people’s wishes came true in 2019 when Cote de Pablo returned to “NCIS.” Although she didn’t have as much on-screen time as people would have liked, just watching her next to Mark Harmon’s character Gibbs was enough.

In July 2013, Cote de Pablo announced that she was preparing to walk away from “NCIS” in the near future, bringing to an end the story arc for her complex and compelling character: Ziva David, a highly trained and extremely deadly Mossad agent from Israel who enjoyed a will-they-or-won’t-they dynamic with her NCIS partner, Anthony DiNozzo.

According to TV Guide, “NCIS” fans were so upset about the end of the line for Ziva David that to encourage a retraction of the actor’s decision to leave, they sent paper clips to CBS, referencing a scene from Season Four when the character tells Anthony DiNozzo, “I will kill you 18 different ways with this paper clip.” It didn’t work, and after eight years with the show, de Pablo’s last episode (not counting future cameo appearances) aired in October 2013. “As far as my decision to leave, that’s a personal thing, and I’d rather leave it at that,” de Pablo said at the time. “Leaving ‘NCIS’ was not planned, so there is no plan,” she cryptically added.

Three years later, de Pablo demystified the circumstances of her exit. “Unfortunately because of political things, and the scripts not being good enough, I chose not to,” the actor said at a Q&A. “I worked eight years in crafting this character, and loving her. And so when I felt that I perceived the character was not being treated with the respect she deserved,” she left.

Coté de Pablo knows what kind of man she wants

What kind of man would be the right one for Coté de Pablo’s future children? In 2010, the NCIS actress revealed to Watch! what she values in a relationship:”One of the things I love is just being able to have a conversation with somebody, being able to be vulnerable and to feel somebody else’s vulnerability. And more so than that, to find the fun and the laughter. If you can laugh with a person, everything’s fine.”She raved about her ex-boyfriend Diego Serrano while they were still in a relationship. What she liked most about him was that he made her life more exciting, as she told Prevention in 2012:

“Every once in a while, he turns to me and goes, ‘Live a little.’ I’ll have chicken with broccoli and he’s like, ‘What about the chocolate cake?’ If it weren’t for him, I’d be the most boring person in Los Angeles.”