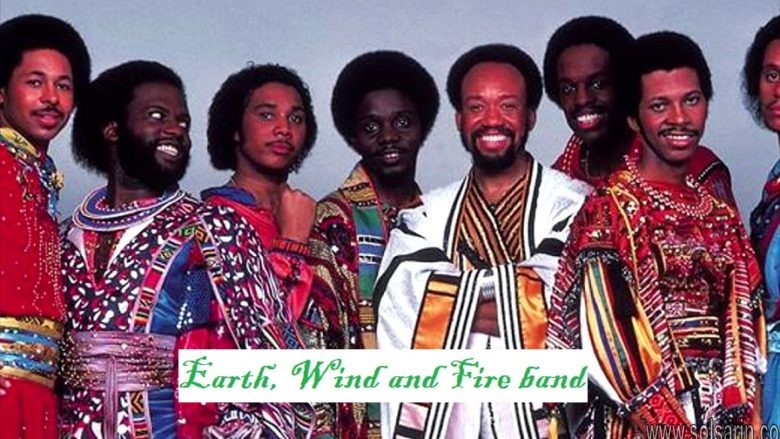 Hello friends. This topic is about “Earth Wind and Fire band” which is really helpful for people who are looking for a interesting biography. Please stay with us, comment your opinion and introduce solsarin to your friends.

Earth, Wind & Fire (EW&F or EWF) is an American band that has spanned the musical genres of R&B, soul, funk, jazz, disco, pop, dance, Latin, and Afro pop. They have been described as one of the most innovative and are among the most commercially successful acts in history. With sales of over 90 million records, they are one of the world’s best-selling bands of all time.

The band has won 6 Grammys from their 17 nominations and four American Music Awards out of 12 nominations. They have been inducted into the Rock and Roll Hall of Fame, the Vocal Group Hall of Fame, the NAACP Image Award Hall of Fame, and Hollywood’s Rockwalk, in addition to receiving a star on the Hollywood Walk of Fame. The band has also received an ASCAP Rhythm & Soul Heritage Award, BET Lifetime Achievement Award, and the Soul Train Legend Award, as well as a NARAS Signature Governor’s Award, a Grammy Lifetime Achievement Award, the 2012 Congressional Horizon Award, and the Kennedy Center Honors in 2019. Rolling Stone called them “innovative, precise yet sensual, calculated yet galvanizing” and declared that the band “changed the sound of black pop”. VH1 has also described EWF as “one of the greatest bands” ever.

In 1969, Maurice White, a former session drummer for Chess Records and former member of the Ramsey Lewis Trio, joined two friends in Chicago, Wade Flemons and Don Whitehead, as a songwriting team composing songs and commercials in the Chicago area. The three friends eventually got a recording contract with Capitol Records. Calling themselves “The Salty Peppers”, they went on to have a marginal hit single in the Midwestern area titled “La La Time”.

The Salty Peppers’ second single, “Uh Huh Yeah”, did not fare as well. Maurice moved on from Chicago to Los Angeles. He added to the band singer Sherry Scott and percussionist Yackov Ben Israel, both from Chicago, and then asked his younger brother Verdine how he would feel about heading out to the West Coast. On June 6, 1970, Verdine left Chicago to join the band as their new bassist. Maurice began shopping demo tapes of the band, featuring Donny Hathaway, around to different record labels and the band was eventually signed to Warner Bros. Records.

The 10 Best Earth Wind and Fire Songs of All-Time

With the possible exception of Sly and the Family Stone, Earth, Wind and Fire did more to popularize funk than any other band. At their peak, they consisted of 10 insanely talented musicians (not to mention the Phoenix Horns section). Their lineup was constantly evolving, but the one permanent fixture was Maurice White, a singer, songwriter, music producer, and visionary who knew exactly what the people wanted, and wasn’t afraid to give it to them. As one of the most critically acclaimed and commercially successful acts of all time, they’ve sold over 90 million albums worldwide, and still continue to draw new fans to this day. Here, we take a look back at their legacy with our pick of the 10 best Earth, Wind and Fire songs of all time.

As Rolling Stone notes, Brazilian Rhyme (Beijo) might just be a flighty groove buried away in the middle of All ‘n All, but the impact of its falsetto disco call — “Beijo! Beijo! Ba da ba ba ba!” – can’t be overstated. It’s been sampled and covered by everyone from A Tribe Called Quest to Big Punisher and MC Shy D. Short it might be, but it’s stunning.

9. Got To Get You Into My Life

Bands that cover the Beatles are either brave or very foolish. How history judges them will usually depend on how wisely they chose the song. In the case of Earth, Wind and Fire, they picked exactly the right song and applied exactly the right treatment. Got to Get You Into My Life was already one of the funkiest songs in the Beatles canon even before EWF got their hands on it. By the time they’d finished with it, it had enough sauce and enough strut to make Sgt. Pepper blush. Released on the band’s first greatest hits album in 1979, its easy-going groves and upbeat harmonies are more than a match for the original.

If you need to perk up your day, listen to Sing A Song. Joyously optimistic, it’s a jubilant slice of pop that’s guaranteed to put a smile on your face and a spring in your step. Released in 1976 from the double album Gratitude, it soared to No. 1 on the Billboard Hot Soul Singles chart and No. 5 on the Billboard Hot 100.

1975 was the year that Earth, Wind and Fire went stratospheric. They’d already achieved some success, but it was their first No.1 album, That’s the Way of the World, that made them huge. One of its highlights is Shining Star, an uplifting, shiny piece of funk that showcases White’s stupendous production talents. Speaking during the song’s induction into the Grammy Hall of Fame in 2008, White recalled “That’s the Way of the World really took off very slow. We thought it wasn’t gonna happen. Then we released ‘Shining Star,’ and it went to the top of the charts and saved the album.” It topped both the Billboard Hot 100 and the R&B Chart (the first and last of their singles to ever achieve the joint honor) and won a Grammy for Best R&B Performance by a Duo or Group with Vocal.

6. After the Love Has Gone

There’s a lot to love about After the Love Has Gone, from the honking horns to the dazzling harmonies. Maurice White’s arrangements are outstanding, while the soulful grooves and bittersweet lyrics are utterly irresistible. Sensitive, soulful, and almost joyously comforting, it makes for happy listening. Released in 1979 from the band’s 9th studio album I Am, it reached No. 2 on the Hot 100 and Hot R&B Singles charts and No. 3 in the UK.

As djrobblog.com says, Boogie Wonderland is something of a guilty pleasure, but we’ll take our pleasures where we can find them, guilty or not. Released at the peak of the band’s disco era, it’s a glossy, slick affair with a soulful strut and a dark heart (the beat might be quicksilver, but the lyrics pre-empt the end of disco in a way that’s far from happy). Released in April 1979, it was a major hit for the band, charting at No. 2 on the Hot Soul Singles chart, No. 14 on the dance chart, and No. 6 on the Billboard Hot 100.

Disco was already on its last legs by 1981, but Earth, Wind and Fire weren’t about to go down with the ship. Let’s Groove is an electrifying piece of post-disco synth-funk with an inspired robotic vocoder on the intro and all the signs of a hit… which was exactly what it was. Released as the lead single from the group’s eleventh studio album Raise!, it became one of their biggest selling singles, hitting the top 20 in the United States, New Zealand, United Kingdom, Canada, and various other regions, and certifying gold after selling over 1 million records.

Anyone who manages to reach the same high notes as Philip Bailey on Reasons should probably see a doctor. It might never have been released as a single, but this classic ballad from That’s the Way of the World deserves (and fortunately got) just as much attention as one. Proving that Earth, Wind and Fire had evolved into much more than a straight-up funk rock band, it got enough airplay to help take That’s the Way of the World all the way to the number one spot.

2. That’s the Way of the World

In 1975, Earth, Wind and Fire released That’s the Way of the World, the accompanying soundtrack to Sig Shore’s movie of the same name. The film flopped but the album soared, taking the band to the No. 1 spot on the Billboard 200 for the first time. At least part of its success can be attributed to the glorious title track. Speaking about it in his autobiography, “Shining Star,” Philip Bailey wrote “when Maurice played us the finished mix … I thought we sounded like angels. … It was as if God had been guiding us.” As Live About notes, it’s since become the group’s “National Anthem” in concerts, as loved today as it was at its release.

If there was one thing that Maurice White always did especially well, it was writing the kind of joyous anthem that never failed to fill a dancefloor. September is one of his most splendid. Who can hear Philip Bailey sing “Ba-de-ya, say that you remember. Ba-de-ya, dancing in September. Ba-de-ya, never was a cloudy day,” without getting up and shaking their thing? Released in 1978 from their greatest hits album, The Best of Earth Wind & Fire, Vol. 1, it became one of their biggest ever hits, peaking at No. 1 on the Billboard Hot R&B Songs chart, No. 8 on the US Billboard Hot 100, and No. 3 on the UK Singles Chart.