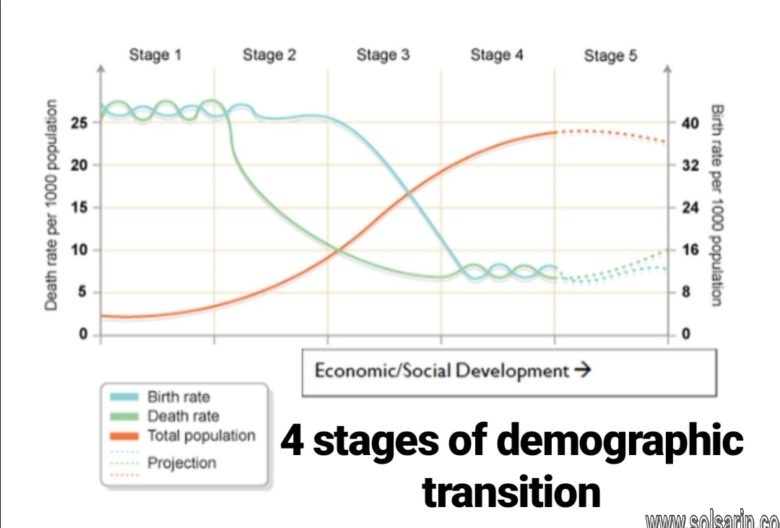 Take a minute and think about major cities in the United States. There are some regions of the U.S., such as the Northeast and Southwest, that have very large cities. On the other hand, there are areas of the U.S., such as the Midwest, that have much smaller cities. This example of uneven distribution would be a topic of demography, which is the study of the size, density, and distribution of the human population. This area of study takes into account birth rates, death rates, age distribution, and any other factors that influence the size and growth of a population.

What is Demographic Transition?

As per the theory of demographic transition, a country is subjected to both high birth and death rates at the first stage of an agrarian economy. The birth rates are very high due to universal and early marriages, widespread prevalence of illiteracy, traditional social beliefs and customs, absence of knowledge about family planning techniques, attitudes towards children for supplementing family income etc.

Thus at this stage, birth rates are high out of economic necessity. In this connection, Coale and Hoover observed, “Children contribute at an early age and are the traditional source of security in the old age of parents. The prevalent high death rates, especially in infancy, imply that such security can be attained only when many children are born”

At this stage, the death rates are also high due to insufficient diets and absence of adequate medical and sanitation facilities. In this economy, the rate of growth of population is not high as high birth rate is compensated by high death rate.

This is the point at which the country begins to experience social and economic development. With more productive agriculture (and thus more food supply), better medical care, and more effective sanitation and hygiene, death rates fall quickly and lifespans are longer. The birth rate, however, does not fall at the same time (it does not increase, but rather remains high). Birth rates far outpace death rates with the result that the population grows rapidly.

In this stage, the birth-rate is high but the death rate is low. It results in a high growth rate of the population. In this stage, income begins to rise and economic activities expand. On account of better health facilities and a nourishing diet, the death rate falls rapidly. The birth rate remains high due to social backwardness and limited access to contraceptives. The key notable features of this stage are as follows:

Fertility remains high at the beginning of the second stage but it declines with time. This is accompanied by a reduced mortality rate. Improvements in sanitation and health conditions lead to a decline in mortality. Because of this gap, the net addition to the population is high.

With the gradual attainment of economic development, the economy of the country started to experience a change in its structure from a purely agrarian to an industrialised one. During this stage people become conscious about the size of the family and also on limiting the size of the family. There will be exodus of population from rural to urban areas in search of food and job.

In order to avoid the threat of large family, people started to raise the age of marriage by postponing marriage as well as to limit reproduction. With the growing industrialisation of the economy, the adoption of small family norm become veryirony in a very old man with enormous wings much popular among the people of higher sections of society and then it started to percolate among the lower sections of society.

Moreover, with growing urbanisation of the country, the adoption of small family norm is becoming very much popular. “One of the features of economic development is typically increasing urbanization, and children are usually more of a burden and less of an asset in an urban setting than in a rural.” Thus at this stage, the country will experience the fall in the birth rate, low death rate and consequently a fall in the rate of growth of population.

A nation enters Stage 4 of the demographic transition model when CBRs equal to or become less than CDRs. When CBRs are equal to CDRs, a nation will experience zero population growth (ZPG). It should be noted that sometimes a nation could have a slightly higher CBR, but still experience ZPG. This occurs in many countries where girls do not live as long before they reach their childbearing years due to gender inequality.

When a country enters Stage 4, the population ages, meanwhile fewer children are born. This creates an enormous strain on the social safety net programs of a country as is tries to support older citizens who are no longer working and contributing to the economy. Most of Europe has entered Stage 4. The United States would be approaching this stage if it were not for migration into the country.

A nation with a large youth population is more likely to be rural with high birthrates and possibly high death rates. This can tell geographers a lot about the health care system of that nation. Moreover, a country in Stage 4 with a large elderly population will have much fewer young people supporting the economy. These two examples represent the dependency ratio, mentioned earlier in this chapter. This ratio is the number of people, young and old, who are dependent on the working force.

Human geographers like to focus on the following demographic groups: 0-14 years old, 15-64 years old, and 65 and older. Individuals who are 0-14 and over 65 are considered dependents (though this is changing in older generations). One-third of all young people live in emerging nations, and this places considerable strain on those nations’ infrastructure such as schools, hospitals, and day-care.

but require more help and resources from the government and economy. The author of this textbook uses the term “emerging nations,”

rather than “less developed” or “developing,” or “third-world” nations as a more inclusive and equitable term.

Another ratio geographers look at is the number of males compared to females. This is called the sex ratio. Globally, more males are born than females, but males also have a higher death rate than females. However, understanding a nation’s sex ratio and its dependency ratio helps human geographers analyze fertility rates and natural increase.

As noted earlier, population growth has increased dramatically in the last century. No country is still in Stage 1, and very few have moved into Stage 4. The majority of the world is either in Stage 2 or 3,

both having higher crude birth rates than crude death rates; therefore, the world’s population is over 7 billion today.