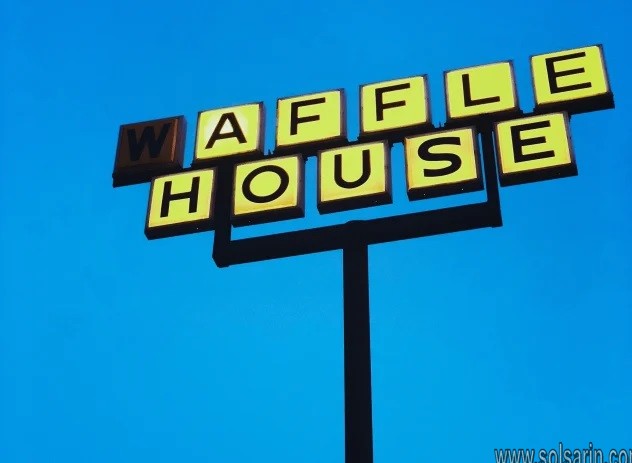 Hello dear readers, thank you for choosing us. In this post on the solsarin site, we will talk about “Waffle House Index”.
Stay with us.
Thanks for your choice.

What is the Waffle House Index?

The Waffle House Index is an informal measure of a storm’s severity and its effect on a stricken community. It comes from Waffle House’s reputation for being well-prepared for disasters and either remaining open during disastrous weather or reopening shortly afterward.

Craig Fugate, who was then the FEMA Administrator, coined the term shortly after the Joplin tornado of May 2011. The massive tornado devastated the town and caused $2.8 billion worth of damage. It also killed 158 people and injured roughly 1,150 others. Both of the Waffle Houses in Joplin, however, remained open.

Waffle House, especially the locations in areas that get a lot of hurricanes, has a reputation for its effective handling of disasters. It has a limited menu prepared for times of food shortages and power outages. It also assembles “Waffle House jump teams” who can quickly reopen the restaurant after a disaster as soon as it is safe to do so. Other franchises, such as Lowe’s, Walmart, and Home Depot, have similar policies.

Panos Kouvelis, who is both the Director of the Boeing Center for Supply Chain Innovation and the Emerson Distinguished Professor of Operations and Manufacturing Management at Washington University in St. Louis, called Waffle House and other companies “role models” for disaster preparedness.

Kouvelis described how Waffle House handles disasters, “They know immediately which stores are going to be affected and they call their employees to know who can show up and who cannot. They have temporary warehouses where they can store food, and most importantly, they know they can operate without a full menu. This is a great example of a company that has learned from the past and developed an excellent emergency plan.”

The Waffle House Index has three levels based on the amount of service that the restaurant can provide right after a bad storm:

GREEN: Full menu; the restaurant sustained little or no damage and has full power

YELLOW: Limited menu; the restaurant is running out of food or has limited power

RED: The Waffle House is closed due to severe flooding or damage

Since Waffle House has a limited menu planned for power outages and limited supplies, the Index rarely reaches red. Fugate once commented, “If you get there and the Waffle House is closed? That’s really bad…” He added that FEMA should send its people and equipment to such communities first.

As bizarre and silly as the Waffle House Index might sound, it does indicate how a community is doing after a devastating weather event. An open Waffle House can feed people who have lost their homes, plus hungry first responders who have worked up an appetite rescuing people. In addition, the quicker businesses like grocery stores, restaurants, and banks reopen after a disaster, the quicker the community at large will recover.

The Waffle House Index is thus a surprisingly useful indicator of how well a community is faring after a severe storm.

Before a storm, a Waffle House Index might indicate who is evacuating in the wake of any alerts or warnings. Businesses like Waffle House pay attention when the state governor declares a state of emergency or has all of the schools closed. They may, in turn, decide to close themselves and tell their employees to evacuate. If a Waffle House closes before a storm, it is a sign that they expect extremely severe weather – and that people in the area should also evacuate.

FEMA does pay attention to such closures, for they can indicate how many people have evacuated from a town. That knowledge helps FEMA decide what they need to do after the storm.

The Waffle House Index is thus a useful tool that indicates how a community has responded to extreme weather.

As Hurricane Ida made landfall on the Louisiana coastline Sunday, Waffle Houses projected to be in the Category 4 storm’s path have closed.

Why does it matter? Well, it’s usually a solid predictor of how destructive severe weather can be.

For those not familiar with popular southern restaurant, Waffle House has been known for staying open 24/7, regardless of extreme weather.

The restaurant’s reputation for remaining open resulted in then-FEMA Administrator Craig Fugate coining the Waffle House Index in 2011. When a tornado hit Joplin, Missouri that year, two Waffle Houses stayed open despite the tornado that caused $2.8 billion worth of damage and killed 158 people in the area.

So how does the Waffle House Index work?

The index has been used to predict how bad extreme weather conditions will affect an area.

Northwest of those locations, all Waffle Houses in the Lafayette area closed early on Sunday so employees could go home, according to the Lafayette Daily Advertiser. The unit manager said restaurants in Jennings and Crowley and west of that would remain open.

Twitter users, including Fugate, shared images of the Waffle Houses closed, noting that the closures mean the storm will have catastrophic effects. The National Oceanic and Atmospheric Administration tweeted on Sunday Ida would cause, “considerable to life-threatening flash and urban flooding and significant river flooding impacts.”

The Waffle House Index Is A Very Real Thing… But What Is It?

No, it’s not just a way to gauge how drunk you were while trying to order your food at 3AM after one too many tequila shots.

With Hurricane Ida bearing down on Louisiana right now, and showing a track that’s predicted to continue across much of the south, for the 24/7 breakfast restaurant, that means one thing: It’s time for executives to head to the situation room.

I learned recently that this term was apparently a southern thing, but it is indeed a very real tool that former FEMA director Craig Fugate came up with back in 2011, who’s a Florida native. The conversation on whether or not Florida’s actually a part of the south is a debate for another article.

Actually, I’ll go ahead and settle it now: it’s not.

Craig came up with the theory based solely on the fact that Waffle House will do whatever it takes to stay open during times of crisis. Waffle Houses team of executives also use extremely accurate high-tech weather monitors and tracking devices to figure out what to do about closing themselves.

And, with so many hurricanes coming through different parts of the south every year, he told the New York Times that whether or not the restaurant remained open, closed, or modified their menu and hours became an actual (unofficial) measuring stick used by the federal government:

“Waffle House has a very simple operation philosophy: get open. They have a corporate philosophy that if there is a hurricane or a storm, they try and get their stores open.