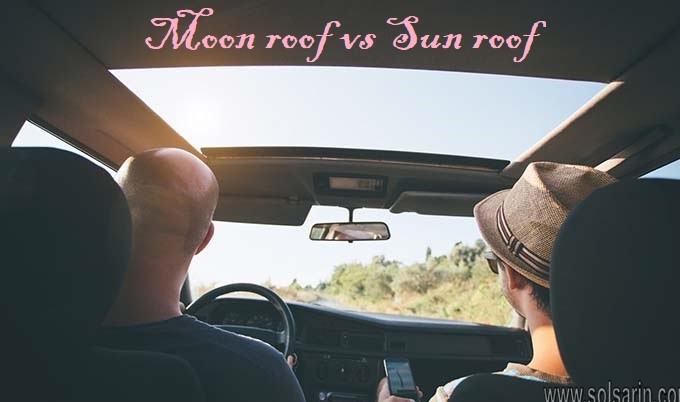 Hey guys! We return with an amazing topic about cars in solsarin. This is “Moon roof vs Sun roof” which is really interesting. I suggest you to stay along with us and tell us your comments.

What Is A Sunroof?

A sunroof is a panel on the roof of a car that either slides back or can be taken out to allow light, air or both to come into a vehicle, according to USNews.com.

According to Motor Trend.com, a sunroof was traditionally an opaque panel that matched the color of the car’s body. Drivers could tilt it open or remove it completely. But, an opaque, movable sunroof is not commonly sold on vehicles anymore, Motor Trend says.

Pros and Cons of a Sunroof

What Is A Moonroof?

A moonroof is considered a type of sunroof, says CARFAX. But a moonroof usually has a tinted glass panel, much like an extra window, on top of the car. It is designed to let in light without having to let in the elements, according to USNews.com.

Unlike a traditional sunroof, moonroofs are not designed to be removed from the vehicle, although they usually slide or tilt open, reports US News.

Many moonroofs come with an interior sliding panel that matches your car’s interior, says US News. When it is closed, no light comes into the car. Once this panel is open, the moonroof is revealed.

Pros and Cons of a Moonroof

What Are Panoramic Roofs?

In recent years, panoramic roofs have become popular, says CARFAX. This type of roof features large glass panels on the entire length of the vehicle roof. These let light into both the front and back seats. This type of roof comes in two styles: fixed in place or with glass panes that slide open and closed, according to CARFAX.

What’s the Difference Between a Sunroof and a Moonroof?

Is there a difference between a sunroof and a moonroof? Most everybody uses the terms interchangeably, but there is a difference between the two concepts. Both are panels in the roof of a car that let light or fresh air inside the vehicle’s cabin. But that’s where the similarities end.

A moonroof is a type of sunroof, except that it’s a transparent, sliding, tinted glass panel. This panel is not removable. More recently, the panoramic style of moonroof has become popular, in which most of the roof of the car is made of glass, but only the panel over the two front seats will slide or open — the roof glass over the rear seats stays fixed. The interior of the car is then shielded by a retractable shade in the headliner; sometimes it’s an electric one, sometimes a manual one. The majority of new cars have moonroofs, as what’s technically considered a sunroof has pretty much gone out of style.

A Roof With a View

The first cars, which appeared in the late 1800s, were open carriages with engines instead of horses. Soon enough, people realized they could enclose those carriages and stay warm and dry. But by 1937, when Nash Motors debuted the first sunroof, people realized that maybe they would like a bit of fresh air, but not so much as a convertible or roadster model would provide.

A sunroof is a metal panel in the roof that can slide back or be removed to let in light and air. But what if you’d like to let in the light without also letting in the weather? Enter the moonroof, which first appeared in the 1973 Lincoln Continental Mark IV. This is a glass panel, usually tinted, with an opaque cover that slides out of the way. The glass might also open, like a sunroof, or it might not.

These terms are used interchangeably by consumers and manufacturers both. Technically, most models today have glass moonroofs that also slide or tilt open. At U.S. News, we usually follow the manufacturer’s lead and use whichever term they do for this feature.

A moonroof is usually an available option, and personal preference will determine if it’s worth the extra money to have the extra light and fresh air. One drawback, especially in smaller vehicles and those with sloped or coupe-style rooflines, is that the thickness of the moonroof will reduce headroom in the rear seats.

There are dozens of models with sunroofs and moonroofs available. We’ll look at the most common varieties and some special mentions for vehicles that take the open-air roof design beyond the usual.

Maintaining A Sunroof And Moonroof

Sunroofs or moonroofs can be expensive to repair or replace, according to YourMechanic.com. AAR Auto Glass recommends that they be vacuumed and washed regularly. They also recommend that all moving parts be lubricated regularly and that vehicle owners schedule yearly maintenance to help prevent problems.

Are A Moonroof And A Sunroof The Same Thing?

In common parlance today, yes. Semantic historians will regale you with stories of how a “sunroof” was traditionally an opaque panel, generally of metal or canvas, and that Ford marketing whiz John Atkinson coined the name “moonroof” to refer to the optional roof conversion (performed by American Sunroof Corporation) introduced on the 1973 Lincoln Mark IV, which replaced the metal panel with a silver-tinted tempered-glass one and a sliding interior sunshade to block the light entirely if desired.

The florid ad copy read, “When open, you see the Moon and it sees you, but when closed only you have the view.” So, historically no, they are not the same. Sunroof means no light or air when the roof is closed (think of a sunshade); moonroof is a glass sunroof you can look through. But today almost nobody sells cars with an opaque movable “sunroof,” so the words are used interchangeably.

Which Is Better, A Sunroof Or Moonroof?

A glass panel paired with a fully opaque sunshade provides the greatest utility in offering full light and wind when fully opened, brighter ambiance and a view of tall buildings or mountains with the outer panel closed and the sunshade open, and the option of no light at all when the sun is directly overhead. Direct high-angle sunshine can cause headaches for some people, so be wary of vehicles like most Teslas, which offer fixed glass roofs with no option of a sunshade at all, or vehicles like some Volkswagens and Minis that offer glass roofs with mesh-like sunshades that still admit a lot of light.

What Are The Different Types Of Moonroofs And Sunroofs?

Built-in roofs typically offer the option of raising the rear of the panel to vent or exhaust air out of the interior, or sliding the panel fully open, stowing the panel between the roof and the headliner.

Spoiler roofs offer the same pop-up vent option, but when opening, it remains above the roof as it slides back.

Pop-up roofs merely pop up at the back to vent and in some cases allow the entire panel to be removed and stored. These were popular in the aftermarket.

Lamella roofs feature numerous glass or opaque panels that can vent and then slide back like a set of horizontal Venetian blinds. The Mercedes ML-Class and Pontiac G6 offered lamella roofs, but the design proved problematic for both.

Panoramic roofs typically offer at least a view out if not open air above both the front and rear seats. The Lincoln MKZ’s large glass spoiler-type Panoramic Retractable Vista Roof ($2,000) slides down to cover the rear window.

How Much Does A Sunroof/Moonroof Cost?

Manufacturers frequently bundle options, making it difficult to know exactly what individual items cost, but figure the value add is typically in the $1,000 range for a new moonroof (which is what most of them are today). Panoramic roofs can double that price or more. Although sunroofs and moonroofs will depreciate along with the car, simply having one can make a used vehicle easier to sell. And if you’re in the used vehicle market, it is still possible to have an aftermarket sunroof installed in an existing vehicle. These pop-up/removable panels can cost $300 to $800 to install but are more likely to leak, rust, or experience other problems than a factory-installed unit.